Day 1B of the PCA Main Event saw Shankar Pillai take the overall lead in the tournament and PokerStars find enough players to hit the $10 million guarantee. 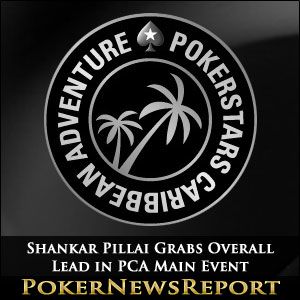 Day 1B of the PCA Main Event saw Shankar Pillai take the overall lead in the tournament and PokerStars find enough players to hit the $10 million guarantee.

There were smiles all around the Imperial Ballroom of the Atlantis Resort in the Bahamas last night after PokerStars were able to confirm that more than 1,000 players had entered the $10,000 buy-in PCA Main Event in total, and that the $10 million guarantee prize fund for the tournament was safe.

The running total of 1,005 players could even be extended by the time play gets underway on Day 2, as late registrations are still open until noon local time; although finding a seat among the 628 survivors from the two opening flights could present a problem!

Finishing on top of the leaderboard after eight levels of action was Shankar Pillai from Commack in New York – a former WSOP bracelet winner (in 2007), who was sitting among the chip leaders for most of the day, before pouncing late on to bag and tag 173,900 chips at the close of play.

Surprisingly – considering that almost three times as many players entered Day 1B than played in the opening flight – Pillai has only a 13,000 chip advantage over Day 1A chip leader Dylan Hortin, who will start Day 2 of the PokerStars Caribbean Adventure Main Event in second place.

It´s a Who´s Who of Poker

Yesterday´s field represented practically everybody who is anybody in the world of live poker. Former WSOP Main Event champions Greg Merson, Jonathan Duhamel, Joe Cada and Chris Moneymaker were joined at the tables by GPI Player of the Year Ole Schemion, GPI Player of the Decade Daniel Negreanu and Online Player of All Time Chris Moorman.

The leading ladies of the poker world also arrived en masse – including Vanessa Selbst, Maria Ho, Amanda Musumeci, Leo Margets, Jennifer Tilley, Lily Kiletto and the irrepressible Ebony Kenney – while the winner of the PCA Super High Rollers Fabian Quoss also made an appearance, but experienced a disastrous last level to finish the day with only 5,800 chips.

Looking Ahead to Day 2 of the PCA Main Event

When play resumes at the Imperial Ballroom this afternoon, the 628 remaining players will be entering Level 9 (blinds 400/800 – ante 100). The level lengths will be increasing to 75 minutes, so it is likely that the tournament will progress just six levels towards Monday´s final table.

There are some fascinating table draws which will get a mixed reaction from those competing on Table 2 (Mike McDonald, Keven Stammen, Shawn Buchanan, Jeremy Ausmus and Marc-Etienne McLaughlin) and Table 45 (Ragi Raghavan, Eddy Sabat, Chris Moneymaker, Antonio Esfandiari and Davidi Kitai), while chip leader Shankar Pillai is drawn on the same table as the well-stacked Victor Levy (150,100 chips), David Bell (109,400 chips) and Greg Merson (108,200 chips).