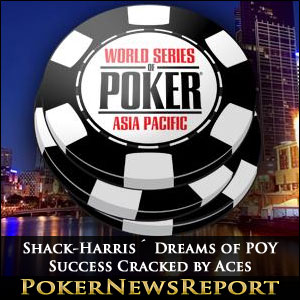 George Danzer is the 2014 WSOP Player of the Year after Brandon Shack-Harris´ elimination from the final event of the WSOP APAC in the cruellest of fashions.

It has been a fascinating battle between George Danzer and Brandon Shack-Harris to see who would become the World Series of Poker Player of the Year for 2014, and it went down to the very last tournament of the WSOP Asia-Pacific Series at the Crown Poker Rooms in Melbourne.

Although the prize for winning the WSOP POY race – entry into the 2015 WSOP Main Event – is relatively unsubstantial in relation to the millions of dollars the two players have won during 2014, the prestige of being the WSOP POY is colossal – just ask dual winner Daniel Negreanu if you want to know what it means to the players!

This year´s race to be Player of the Year was engrossing inasmuch as the lead changed three times during the final ten events of the 2014 WSOP APAC Series. Brandon Shack-Harris had arrived in Australia with the narrowest of advantages over George Danzer, but Danzer moved to the top of the leaderboard in the first event after finishing in twenty-second place.

Brandon Shack-Harris managed a sixth place finish in Event #4 to regain the advantage but – after securing a final table appearance in Event #6 – George Danzer won his third WSOP bracelet of the year when taking down Event #8. Danzer´s victory in the Eight-Game Mixed Event gave him a 116 points advantage over Brandon Shack-Harris with just the WSOP APAC Main Event and WSOP APAC High Rollers to go.

George Danzer bust early from the WSOP APAC Main Event, but Brandon Shack-Harris enjoyed another good run to finish in seventeenth place and collect 23 points towards the WSOP Player of the Year. He immediately late registered for the WSOP APAC High Rollers, knowing that a fourth place finish (or better) would allow him to snatch the title at the death.

A Horrible Way to Lose

When Brandon Shack-Harris entered the WSOP APAC High Rollers, the game was already in Level 11 (blinds 1,200/2,400 – ante 400) but with a starting chip stack of 75,000 chips he still had thirty-one big blinds to play with. His stack was still intact towards the end of level 12, but then this happened:

Brandon Shack-Harris opened the betting with K♠ Q♣ and Sean Winter flat-called with A♥ A♦. The flop of Q♥ Q♦ 8♥ could not have been better for Shack-Harris – giving him trip Queens and making him an 88 percent favourite for an early double-up after he shoved his chips into the middle and Winter made the call.

The 9♣ on the Turn improved the probability of a Shack-Harris double-up to 95 percent, but Winter spiked the A♠ on the River to give him a Full House of Aces over Queens and eliminate Brandon Shack-Harris in thirtieth place – ending the American´s dream of the WSOP POY title.

Both players immediately went on Twitter to give their reactions to the end of the race – George “@trickyscarfy” Danzer tweeting that, although he enjoyed the sweat, he was relieved now that the race was over. He said that he knew Brandon Shack-Harris will get another chance to win the title. In reply Brandon “@Oscillator_WSOP” Shack-Harris tweeted:

Thanks so much to all of the staff, dealers, photographers, bloggers, fellow players, friends, and supporters, for their contributions, hard work, and well wishes throughout the course of this journey. And congratulations to @trickyscarfy for taking down Player of the Year!

Brandon Shack-Harris concluded his tweet with the hashtag #wontflipoffurbanner – a reference to the picture that all players will see when they arrive at the Rio All Suites Hotel & Casino in Las Vegas next May to start the 2015 WSOP Player of the Year competition.