Trishelle Cannatella, the Playboy model and reality TV star, who previously was one of Absolute Poker’s sposored pros, has signed on with Team Sure Bet as one of the new online poker site’s stable of pro players. 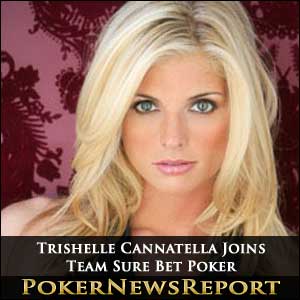 Trishelle Cannatella, the Playboy model and reality TV star, who previously was one of Absolute Poker’s sposored pros, has signed on with Team Sure Bet Poker as one of the new online poker site’s stable of pro players.

Trishelle Cannatella finished 3rd in the World Poker Tour 2010 Invitational Tournament, taking home $20,000. Her association with Absolute Poker, the online poker industry’s third largest poker site prior to the fallout from Black Friday in which Pokerstars, Full Tilt Poker and Absolute Poker had their operations shut down by the federal government, began in November of 2009 and ended in May, 2011.

I am so excited to join Team Sure Bet Poker, Cannatella said, and I cannot wait to represent Sure Bet at tournaments both live and online.

In addition to posing nude for Playboy, the 31-year-old American actress of Italian and French ancestry has appeared in magazines such as Maxim, Elle Girl and Spin. Her reality TV gigs have included being a member of MTV’s The Real World: Las Vegas and also appearing on episodes of Punk’d, The Surreal Life and Fear Factor.

Sure Bet Poker has announced its grand opening for October 1. Its team of pros include CEO Jason Sallman, Mike Wolf and Kyle Cartwright, who has amassed earnings of more than $350,000 since last year. The new online poker site is licensed in Costa Rica and, according to its website, is offering live customer service, lower rake than other [geolink href=”https://www.pokernewsreport.com/online-poker-rooms”]poker sites[/geolink], a generous deposit bonus and additional bonuses for reaching higher status levels.

With the events of Black Friday still looming large and the recent news that Full Tilt Poker and its board of directors face allegations of fraud and money laundering and, subsequently, having their operating license revoked by the Alderney Gaming Control Commission, this does not seem to be the opportune time to be launching a new online poker room. However, Sure Bet Poker is trying to beat the odds and believes that adding Cannatella to the team can help attract players.

We couldn’t be happier to have her on the team, Sallman said. She is a great addition and I think the poker world will see big things from her in the near future.