Sergio Fernandez takes a huge chip lead into the penultimate day of the Bwin WPT Barcelona Main Event after an incredible Day 3 for the local cash game player. 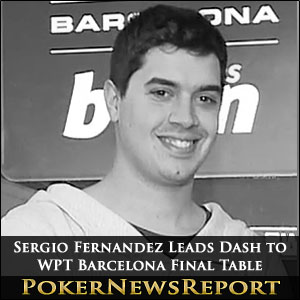 Sergio Fernandez takes a huge chip lead into the penultimate day of the Bwin WPT Barcelona Main Event after an incredible Day 3 for the local cash game player.

Fernandez brought his chip stack of 66,000 to the tables at the start of Day 3 – in thirty-fifth position of the remaining forty-two players – and doubtful to be one of the twenty-seven players to cash in the WPT Barcelona Main Event. By the close of play, Fernandez had chipped up to 1,268,000 chips and holds a huge chip lead of 71 Big Blinds over nearest challengers Canadians Chanracy Khun (838,000 chips) and David Konstandoff (791,000 chips).

Day 3 in a Nutshell

Despite the proximity to the bubble, there was no hanging around when play resumed at the Casino Barcelona on Day 3 of the WPT Barcelona Main Event. A series of players left quickly in the most unfortunate of circumstances. Alain Roy was one of the first out of the door when his full house was blown away by the rivered Quad Jacks of Tahiri Hassani and he was soon followed by Jaroslaw Jaskiewicz (AQ) when Benjamin Pollak (A7) rivered a flush.

Sergio Fernandez (K♠ K♣) started his climb to the top of the chip stacks by tripling up against Jari Mahonen (Q♦ Q♣) and Nikolaus Teichert (2♥ 2♦), and then eliminated Henri Benoni in AA > AQ fashion. Once the bubble burst and the players were in the money, there was no stopping Fernandez. He bust the last American standing – Brynn Kenney – when being dealt Aces once again, and then eliminated Atanas Gueorguiev (99 > Q10), Kevin Vandersmissen (KK > A6) and Timothy Harold (99 > KJ) within the space of an hour.

The fortunate Tahiri Hassani (above) was also responsible for the elimination of Victor De La Malla (AK > AJ) and Benjamin Pollak remained in contention for the WPT Barcelona Main Event first prize of $258,448 by busting Ognjen Sekularac when his 8♥ 8♠ held against the Serbian´s A♥ 7♦. Fernandez´ closest pursuer Chanracy Khun would have been a lot closer to the chip leader had he not been coolered by David Konstandoff (6♠ 5♠ straight > A♦ 5♦ straight) and fourth place Antonio Alfaia owes his position to winning a J♥ J♦ > A♠ Q♥ flip against Henry Koivisto.

When the remaining thirteen players sit down at the Casino Barcelona, it will be for the start of Level 18 (blinds 3,000/6,000 – ante 1,000). Play is scheduled to continue until just a final table of six players remain, and you can find out whether Sergio Fernandez has managed to maintain his chip advantage by following PokerNewsReport on Twitter. The full chip counts for the thirteen remaining players are as follow:-