The sentencing of Christian Lusardi – responsible for introducing counterfeit chips at the Borgata Winter Open last year – has been delayed until March 30. 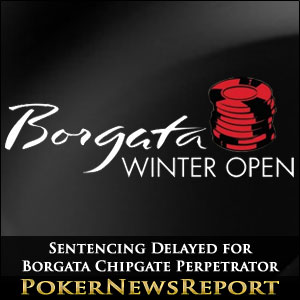 The sentencing of Christian Lusardi – responsible for introducing counterfeit chips at the Borgata Winter Open last year – has been delayed until March 30.

One of the biggest poker stories of last year concerned the introduction of counterfeit chips in the first event of the 2014 Borgata Winter Open – a $1 million guaranteed tournament that attracted 4,814 entries and that was abandoned with just twenty-seven players remaining.

Christian Lusardi was identified as the perpetrator of the fraud after he attempted to flush thousands of dollars of counterfeit chips down the toilet of his room at the Harrah´s Resort and Casino in Atlantic City, and the chips clogged the sewer pipes.

Lusardi was arrested and charged with rigging a publicly exhibited contest, criminal attempt and theft by deception. The Borgata refunded the buy-ins of all the players that had been affected by Lusardi´s cheating and split what was left between the players remaining in the tournament – a universally criticised decision which resulted in a 14% reduction in the number of entries received for this year´s equivalent tournament.

A plea agreement was reached with the New Jersey Department of Gaming Enforcement and Lusardi was released from the Atlantic County Justice Facility after posting $300,000 bail. The details of the plea agreement were sealed, but Lusardi was soon to be in more trouble after it was discovered he was also running a multi-million dollar DVD bootlegging operation.

That´s a Lot of Films to Watch!

Apparently Lusardi had been under observation since mid-2012 for importing counterfeit DVDs from China. Following his arrest for the Borgata Chipgate scandal, federal authorities raided Lusardi´s home in Fayetteville, North Carolina, and found 37,500 pirated DVDs.

Lusardi was charged with copyright infringement in violation of §17 and §18 of the US Criminal Code and with trafficking in counterfeit labels – also in violation of §18. He was placed on home detention, had his passport taken away from him and had to undergo mental health testing.

Lusardi was prohibited from visiting any casino, gambling online and he had to give up alcohol under the terms of his conditional release. He was only allowed to travel within North Carolina and New Jersey for employment, religious or medical reasons, or to appear in court.

Lusardi pled guilty to the charges and was originally scheduled to be sentenced for his DVD bootlegging crimes on January 6th. However his defence attorneys requested more time to consult with their client and raise issues in the draft pre-sentencing report. A postponement until February 17th was agreed, but that was also not enough time for the Motion Picture Association of America – representing the victims of Lusardi´s criminal enterprises – to write a “victim impact statement”.

As the victim impact statement influences how much time Lusardi will eventually spend in jail, Senior US District Judge James C Fox agreed to a further postponement, and the sentencing hearing will now be heard on March 30th at the United States District Court for the Eastern District of North Carolina Western Division.

Let´s hope they throw away the key!