The World Poker Tour´s inaugural WPT500@Aria was an incredible success – with 3,599 players ponying up the $565.00 buy-in to smash the $1 million guarantee. 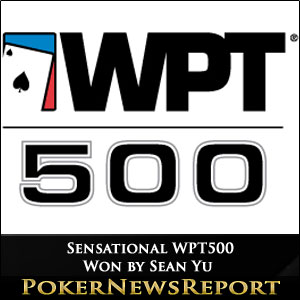 The World Poker Tour´s inaugural WPT500@Aria was an incredible success – with 3,599 players ponying up the $565.00 buy-in to smash the $1 million guarantee.

It was a fairly brave decision by the World Poker Tour to pitch their first WPT500 event across the road from the WSOP Main Event, but it certainly paid dividends as 75% more players than anticipated entered – or re-entered – the tournament to create a prize pool of $1,799,500.

The format of the tournament was also a little unusual. There were six opening flights (Day 1s), with the top 12% of entries cashing in each flight, but only the top 5% of players carrying forward chips to yesterday´s concluding Day 2.

By the time that yesterday morning´s Turbo Flight had concluded (Day 1F – started at 8.30am!), 176 players had advanced through to the final stage, and were each assured a minimum cash of $1,250. However, by the end of the day one lucky player would be $260,000 richer plus have won a WPT bonus package to the Dusk till Dawn WPT500 in November.

When Day 2 got underway, the clock was set back to Level 19 (the earliest finish of the 6 opening flights), with blinds of 4,000/8,000 (ante 1,000) and an average chip stack of 306,000 (38 big blinds). Consequently, the action was fast and furious, and it did not take long for players to relinquish their chips and head for the cashier´s desk.

Within three 40-minute levels, the field had been reduced to less than 100 players, during which time we had lost Mike Leah, Mike Sexton and Ole Schemion (who is still running deep in the WSOP Main Event). By the dinner break at the end of Level 27, just 31 players remained – with Christian Harder (5,960,000 chips) leading the way after busting out Scott Montgomery with a Turned flush > Montgomery´s trip Nines.

Following the break for dinner, Kareem Marshall appeared from nowhere to head the chip counts – and be the first player through the 10 million chip barrier – when doubling up against Jonas Ten Cate 7♠ 7♣ > J♠ J♥ (Marshall flopped a set of Sevens) and Scott Clements 8♣ 8♠ > J♥ J♣ (Marshall flopped a set of Eights); but Clements bounced back and eliminated Zarah Whimper in thirteenth place 6♣ 6♥ > A♦ J♠, and Kazu Oshima in tenth place 8♠ 8♣ > K♠ J♥ to take the chip lead to the final table.

The final table got underway with just a few hands left in Level 31 (blinds 60,000/120,000 – ante 20,000) and immediately Scott Clements extended his lead – rivering an Eight-high straight in the first hand to slice Sean Yu´s chip stack in half. However, Clements advantage was short lived when Kareem Marshall bust Messadek Soufiane in ninth place A♥ A♠ > 10♦ 10♠, and Brian Benhamou in seventh place K♥ K♠ > A♦ Q♦ to chip up to beyond 17 million chips.

Between the two Marshall eliminations, Christian Harder also improved his position by eliminating Terry Fleischer in eighth place A♣ Q♣ > A♥ K♦ and, as the game went six-handed, Harder moved into second place behind Marshall with a turned diamond flush against Jeffrey Ray. Scott Clements tried to keep the pressure on the front two, and eliminated Luis Nargentino in sixth place with a flopped Ace (A♥ J♦ > J♣ J♠), but in the very next hand he doubled up Sean Yu J♦ 8♠ > A♦ 4♣ when both players paired their lower card on the flop.

Clements´ roller-coaster ride continued as the blinds increased in Level 34 to 150,000/300,000 (ante 50,000); and he regained the chip lead in a hand which saw Jeffrey Ray moving all-in with A♣ 8♣, Clements shoving over the top with A♥ Q♠ and Kareem Marshall covering both players with A♠ J♣. All three players paired their Aces on the board of 9♦ 4♦ 2♥ / 5♦ / A♦, but Clements scooped the pot – and eliminated Jeffrey Ray in fifth place – with his superior kicker.

With the time pushing on past 4:00am in Las Vegas, Scott Clements – who was firing his fourth bullet in the WPT500 when starting the Turbo Day 1F at 8:30am – showed no signs of tiredness. He took a stack of chips from Sean Yu when his 3♥ 5♥ turned a Five-high straight, and a rivered Seven-high straight almost immediately to deplete Yu´s stack further.

Yu survived an all-in to double up against Clements – when his 9♣ 5♣ made two pairs against Clements´ (A♥ K♠) pair of Aces – and it was Christian Harder who was the next player to depart the WPT500 final table in third place, moving all-in with 9♣ 8♠ after the flop of 9♦ 7♦ 4♠, but failing to improve past Kareem Marshall´s K♣ K♠ overpair.

Incredibly Sean Yu rose from being the shortest-stacked of the three remaining players to chip leader in a matter of hands – the first when forcing Scott Clements off of a 2.5 million chip pot with a post-flop raise after the dealer had dealt Q♣ Q♥ J♠ – and the second when cracking Kareem Marshall´s A♠ A♦ with 8♦ 9♦, when the 5♥ on the Turn completed a Nine-high straight. Even more sensationally, Yu then eliminated Scott Clements in third place J♥ J♠ > A♦ 4♦ to take a 33,650,000 -v- 20,850,000 chip advantage into the heads-up against Kareem Marshall.

When the heads-up began, blinds were now 250,000/500,000 (ante 75,000), and practically every hand had the potential to bring the tournament to a close. Sean Yu initially extended his advantage when taking an eight million chip pot (A♠ 7♥ > Q♥ 10♠) with a flopped pair of Aces against Kareem Marshall´s turned pair of Tens, but Marshall doubled back almost immediately with two pairs (K♥ Q♣) over Yu´s flopped pair of Fives.

The momentum stayed with Marshall, and he took a couple of seven figure pots with small pairs to level the chip counts. Ultimately there was always going to be one big hand that decided the outcome of the WPT500 event, and it came at 5:30am in the morning, when Kareem Marshall moved all-in with A♦ K♦ after the flop of 10♣ 8♠ 7♣ and Yu instantly made the call immediately with 10♦ 7♦ for two pairs.

Marshall´s bluff had failed miserably and, after the dealer had dealt the J♣ on the Turn and A♥ on the River, the celebrations started for Sean Yu – the first winner of the Aria WPT500.