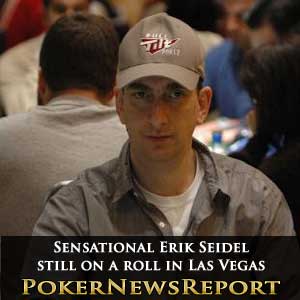 Can anyone stop Erik Seidel? That is the question numerous big-name poker stars must be asking themselves right now after he fashioned a heads-up clash with fellow American Erick Lindgren in the World Poker Tour’s World Championship Super High Roller event in Las Vegas.

With the New Yorker having already cashed in five previous high roller events this year, it seems Full Tilt pro Seidel is almost unstoppable. In fact, he won January’s Aussie Millions and the WPT LA Poker Classic in February, and recorded a fourth place finish at the PokerStars Caribbean Adventure (PCA) in January.

Then came his National Heads-Up Poker Championship success in March, when he defeated Chris Moneymaker, while Seidel just missed out on his second WPT title with a second place in the Hollywood Open.

Eight-time World Series of Poker bracelet winner Seidel’s incredible run of success shows no sign of abating, either, as he goes into his heads-up clash in the $100,000 buy-in event against Lindgren with a healthy chip lead of about two to one.

If the Vegas-based Seidel does emerge triumphant, he will move even further away from his rivals on the all-time leading money list.

For 34-year-old Californian Lindgren, though, a win would provide him with the biggest payout of his poker career, as well as a first high place finish since making the money in January’s main event of the Aussie Millions. As it is, even a runner-up spot would surpass his entire earnings for last year.

With Negreanu out, we were left with Seidel and Lindgren. Following some heads-up play, the tournament director asked the players whether they would like to continue beyond the 20th level, and was met with a relieved duo requesting a much-needed break.

There should be some thrilling heads-up play when this duo return to action – and we’ll be there to provide you with all the latest news tomorrow.