Numerous records tumbled at this year’s PokerStars Spring Championship of Online Poker (SCOOP) as the festival came to a close yesterday. 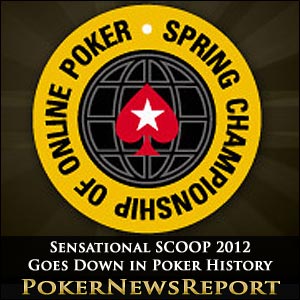 Numerous records tumbled at this year’s PokerStars Spring Championship of Online Poker (SCOOP) as the festival came to a close yesterday, with American Shaun Deeb leading the way with four titles.

Additionally, the final two tournaments – including the main event – were completed yesterday as this amazing festival made an indelible impact on the poker world.

As mentioned in Monday’s article, SCOOP 2012 created a new marker as the richest internet tournament series ever staged, with the 120 events seeing $65,332,179 handed out to competitors to beat the previous record from SCOOP 2010, when $64,230,010 was given to in-the-money finishers.

MicroMillions Still Out in Front

However, a slight clarification is needed to the overall entries stat given in that same article. While this year’s 526,154 entries beat the 461,936 from SCOOP 2010, as well as all series staged under the ‘Championship of Online Poker’ banner by the world’s largest and most popular poker website – which also includes WCOOP and TCOOP – the actual all-time record came back in March of this year with PokerStars’ inaugural MicroMillions.

An incredible 1,294,883 buy-ins were noted for that series, making that the target for all online series to follow.

Of course, Mexico-based Deeb – who plays under ‘shaundeeb’ – hit a new high for SCOOP with his four titles taking him to five overall in the series. Really, the 26-year-old was in a class of his own as he also recorded the most cashes by any player with 27 – one ahead of Team PokerStars Pro Marcin ‘Goral’ Horecki – as well as the highest number of final tables at eight.

Additionally, Deeb – who earned $237,528.05 for the series – dominated the leaderboard standings, taking top spot in the high stakes and overall categories to emerge as the Player of the Series.

The low section was tight as a trio of Canada-based players fought it out for the top spot, with Team PokerStars Online’s George ‘Jorj95’ Lind seeing off second placed ‘evanski’ by 20 points and ‘Drew M Scott’ by 30. American Lind picked up a trophy and a PokerStars Caribbean Adventure (PCA) 2013 package for his success after cashing in 11 low stakes tournaments.

It was even tighter in the medium table, as just 10 points covered the top four finishers. But it was Sweden’s ‘C. Darwin2’ who just stayed ahead by five points from ‘Drew M Scott’ and ‘SebbyGl’, of Germany, to collect his trophy and package to next year’s PCA.

Now, while the previous two leaderboards were hard fought, Deeb smashed all opposition in the high stakes category as he beat second placed ‘joacowalter’ by a huge 240 points – the American picking up 520 points to come close to doubling his rival’s 280.

American is Player of the Series

Deeb – who cashed in nine high stakes events, winning four – was, of course, awarded a PCA package and trophy, but also bagged another trophy and a European Poker Tour (EPT) Grand Final package for next year as he easily topped the overall leaderboard.

The New York State pro earned 860 points to see off Lind by 370 points, while he also took fourth place – alongside Poland’s ‘Goral’ – in the low stakes leaderboard for what was an amazing SCOOP 2012.

Meanwhile, three No-Limit Hold’em main event titles were also awarded yesterday as this year’s series drew to a conclusion, with Costa Rico’s Nick ‘GripDsNutz’ Grippo earning $798,675 and a Movada winner’s watch in the $10,300 buy-in (high) tournament following a three-way deal that left second placed ‘sp00led’, of Canada, and Poland’s ‘sosickPL’ in third with $718,675 each.

Meanwhile, here are some more stats relating to SCOOP 2012 to chew on: