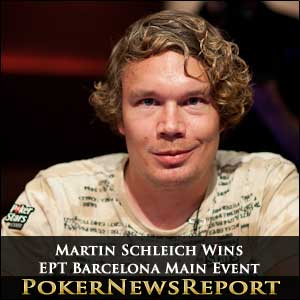 On a day which had been full of drama, bluffs, counter-bluffs and astonishing comebacks; victory in a simple A♥ 9♠ versus A♣ 7♥ race against Serbian/Spaniard Dragan Kostic gave Schleich his first major title and a prize of €850,000.

In winning the EPT Barcelona, German poker player Martin Schleich not only had to overcome his seven opponents, but a partisan crowd hoping for a first Spanish victory in an EPT Main Event – incredibly any EPT Main Event.

There was also a large segment of the rail cheering on Eugene Katchalov in his bid to become the latest Triple Crown winner, and maybe even more supporting French restaurateur, Isabel Baltazar – the first woman to reach an EPT final table since Liv Boeree in San Remo 2010.

Isabel Baltazar the First to Bust

After a delayed start to the final day to suit the TV producers, the chip lead changed after just two hands –  Saar Wilf taking 2 million chips from overnight leader Tomeu Gomila when his A♠ A♦ held against Gomila´s pocket Jacks.

Ominously Eugene Katchalov was also collecting chips – doubling up when his A♥ Q♠ dominated Saar Wilf´s Q♣ 9♣ and eliminating Isabel Baltazar in eighth place when she bet into the PokerStars pro with Q♦ Q♠ against Katchalov´s A♦ A♣.

Juan Manuel Perez Tripped and Out

It was a further two hours before another player was to depart. Juan Manuel Perez had been the short-stacked player ever since Baltazar´s departure, but eventually he had seen an opportunity to get competitive again.

Holding A♦ K♥ on the button, he three-bet Tomeu Gomila´s (10♠ 10♣) mid-table raise and then pushed all-in when Gomila responded by four-betting him.

The flop of 3♣ 7♣ J♣ gave no help to Perez, and the 10♥ on the river gave Gomila trip Tens and a valuable chip bump to over 6 million.

Katchalov soon turned the table on its head by doubling up against Gomila with A♥ J♥ and doubling again in the very next hand against Raul Mestre with A♣ K♠.

Where Did Schleich Come From?

With much of the attention focused on the surge of Katchalov and the flamboyance of Gomila, Martin Schleich had slipped under the radar a little.

Starting the day in fifth position, Schleich had been playing very tight – quietly picking up a few blinds and minor pots to, well, keep himself under the radar.

That was all about to change as he doubled up with Q♦ Q♥ against Raul Mestre´s K♥ 10♥ and then eliminated Gomila in fifth with Queens again (Q♣ Q♦) when Gomila´s A♠ K♥ failed to catch.

Mestre, Katchalov and the Dragan

Raul Mestre, who had been in constant competition with Tomeu Gomila for the chip lead over the five days of the tournament, was the next to go.

First he was crippled by Dragan Kostic (7♠ 7♥) when his K♣ 9♥ failed to connect with the community cards and was then eliminated from the tournament in fourth place – shoving with A♣ 5♦ against Katchalov´s Q♣ 10♦.

Although having the better hand, the flop of J♣ 8♦ 8♥ and turn of 9♠ gave Katchalov an unbeatable straight, and Mestre was sent to the rail.

Three Down – One to Go

With the quick departures of Perez, Gomila and Mestre, Dragan Kostic was the last Spaniard standing, but he gave the supporting rail plenty to cheer about over the next three hours of play – using tempered aggression to squeeze pot after pot out of Schleich and Katchalov.

In fact, it was almost four and a half hours of to-ing and fro-ing between the three players before there was any substantial action – but what a hand it was.

When Martin Schleich raised into Eugene Katchalov on the big blind, Katchalov saw an opportunity with his 7♠ 7♣ to increase his dwindling chip stack of 3.3 million chips and three-bet Schleich all-in.

With the only one out Katchalov needed not arriving on the turn or river, an exhausted Katchalov was eliminated from the tournament in third place.

After the extended and exhausting period of three-handed play, everybody was hoping for a quick conclusion to the tournament and, taking a 2:1 lead into the heads-up, so did Marin Schleich.

Schleich´s initial aggression cost him dear when losing 2 million chips in an uncontested hand, and it was only when he forced Kostic out of three consecutive pots that he recovered to his starting position.

An hour went by before the deciding hand was played – Schleich responding to Kostic´s new shove-or-fold policy with A♥ 9♠ against the Spaniard’s A♣ 7♥.

After the flop (Q♣ 5♥ 2♣) and turn (K♣) Kostic still had chances to win the hand with any club or seven, or chop it with any five or two.

It was not to be as the 9♥ on the river paired with Schleich´s pocket cards to give the German a well deserved victory, the winner´s plaque, a cheque for €850.000 and a ticket into the EPT London Main Event – the next stop on the European Poker Tour which starts on September 30th.