In a tournament that has broken all single-day entry records in poker history, the WSOP Event #29 Seniors No-Limit Hold’em attracted an astounding 4,128 players! 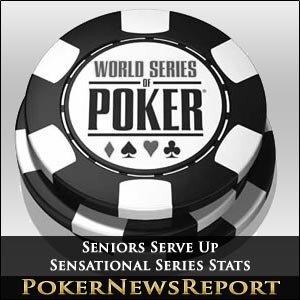 What an incredible turnout for the opening day of the $1,000 buy-in Seniors No-Limit Hold’em Championship.

In a tournament that has broken all single-day entry records in poker history, event #29 of the 43rd annual staging of the world’s biggest poker festival attracted an astounding 4,128 players!

Note, no previous event has ever attracted such a huge number – not even the 2006 main event, not the $1,000 buy-in Stimulus Special in 2009, and not one of the enormous No-Limit Hold’em tournaments that have appeared since poker hit the big time.

If this tournament continues to develop as it has over the past few years, we could well see a 5,000-player field next year at the Rio.

Such were the massive numbers for this event, competitors had to be spread out across the 478 tables in the Amazon, Brasilia and Pavilion Rooms of the Rio, while the start time was brought forward to 10am. But this tournament is also the biggest of the 2012 series – so far – with winner Allyn Jaffrey-Shulman pocketing $603,713 from the $3,715,200 prize pool.

An incredible 423 players were also paid, with Illinois’ Jerry Richard the first to cash for $1,858 after the money bubble was burst.

If these number don’t impress you, take note that just seven main events have beaten the size of this tournament – and, of course, they all had multiple starting days. Why is this?

‘Poker Is Fun’ For Mature Field

Well, ‘Oklahoma Johnny’ Hale – the unofficial spokesman for the senior poker players – might just have the answer. He reckons the older players are just happy to have a good time while they are in Vegas, with the majority not caring “if they win or lose”.

Hale also pointed out that, for most of the seniors, “poker is fun” – particularly as they have already enjoyed great successes in life – although it should also be remembered that the top prize for this event will only be second, so far, to the $781,398 picked up by Ashkan Razavi for winning the $1,500 No-Limit Hold’em Re-Entry event #9.

But the records don’t stop there, with the best three-day weekend total being set at 9,734 starters over three events. That’s just 266 players short of breaking through the 10,000-entry barrier, folks.

Finally, the deepstack events smashed all records last week, with the non-gold bracelet tournaments attracting over 4,000 entries in total – including the biggest field in the history of the event on Sunday.