The United States Senate Committee on Indian Affairs held its second hearing on internet gambling in slightly less than three months, this time focusing on the U.S. Department of Justice (DoJ) opinion released in December that interpreted the 1961 Wire Act as applying only to sports wagering and how that would effect Indian tribes and their gambling interests. 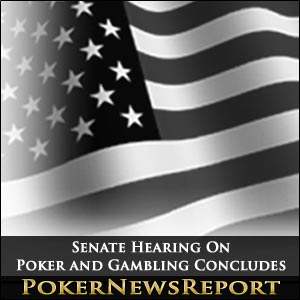 The United States Senate Committee on Indian Affairs held its second hearing on internet gambling in slightly less than three months, this time focusing on the U.S. Department of Justice (DoJ) opinion released in December that interpreted the 1961 Wire Act as applying only to sports wagering and how that would effect Indian tribes and their gambling interests.

The Senate debate, entitled “Oversight Hearing on the U.S. Department of Justice Opinion on Internet Gaming: What’s at Stake for Tribes,” started 30 minutes later than its scheduled time and ran for about one and 1/2 hours. Perhaps the most noteworthy testimony was delivered by well-known gambling expert and Senior Professor at Whittier Law School, I. Nelson Rose, who made it clear that the DoJ’s clarification of the Wire Act allows internet gambling to proceed on an intrastate and interstate basis.

“There is no Federal statute that would prevent a state from legalizing virtually any form of internet gambling other than sports betting,” Rose testified. “States can legalize it, they can form compacts via interstate and even international to form pools of players.”

However, what is not clear at this time is whether or not Indian tribes can legally accept wagers and bets from gamblers located off of tribal gaming reservations or lands. That difficulty in interpreting current gambling laws and structuring new regulations that permit certain Indian tribes to offer internet gambling and how those laws may be viewed in conjunction with the unlimited reach of the worldwideweb is something that still needs to be debated and codified.

“For many Indian tribes that have state compacts, internet gambling would be legal under these compacts,” said S.J. Quinney College of Law professor Alex Skibine. “However, for other tribes, that may not be the case. Those tribes would have a very hard time amending their compacts… Even for those tribes for whom it is legal, they may be restricted to wagering originating on Indian land. This limitation makes no sense when it comes to internet gaming since internet gaming is borderless.”

One of the themes coming from the tribal faction was the desire to be included in any online poker and gambling legislation and not to be left out of the enormous revenue expected from legalization.

“In recent years, big gaming and state regulatory interests in Nevada and New Jersey have pushed for Federal legislation that would give them monopolistic control of internet gaming in the USA,” Seneca Nation of Indians President Robert Odawi Porter testified. “They are determined to shove Indian gaming away from the table. Indian nations not only demand a seat at the table, we insist we already own a table and should not have it stolen from us.”

I think its quite clear that Indian tribes will be included in any online poker and gambling legislation. After all, that is the reason that these Senate hearings are being held. To make sure that Indian gaming interests are recognized.

As the largest lobbying group for poker players, the Poker Players Alliance received an invitation to present testimony at the hearing via Patrick Fleming in his role as Litigation Support Director for the organization. Fleming expounded on the fact that online poker legislation would not be detrimental to the revenues of Indian tribes.

Another important theme of yesterday’s testimony came from Kevin Washburn, the University of New Mexico’s Dean of the School of Law Administration. Washburn echoed the sentiments of many insiders in the poker industry by urging Congress to enact Federal legislation, as opposed to the mishmash of regulations by individual states that we are bound to see if Congress does not act soon. Washburn said that the recent DoJ ruling has “created a chaotic atmosphere” that can only be remedied by Federal online poker and gambling legislation.