With online poker dead at the federal level due to the failure of the Reid-Kyl bill, Sen. Rod Wright reintroduced a poker-only bill in California. 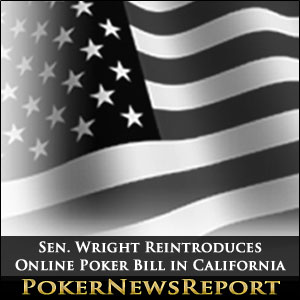 With online poker dead at the federal level due to the failure of the Reid-Kyl bill, Sen. Rod Wright reintroduced a poker-only bill in California.

Wright is the lone sponsor of SB 51, which is nearly identical to SB 1463, the bill that failed to gain support in the legislative session that ended in August. The state’s gaming interests of card rooms, racetracks and Indian tribes never could find common ground on SB 1463.

SB 51 may have a slightly better chance of passing in 2013 due to the disbanding of the California Online Poker Association (COPA) a couple months ago. That group of 31 tribes and 29 card rooms called it quits following repeated failures at lobbying for online poker legislation. COPA had spent over $1 million on CalShark.com, a free-play online poker site that was intended to transition to real play upon a poker bill gaining approval. The site has since been taken offline.

Prior to its dissolution, COPA had proposed its own draft of online poker legislation that excluded California’s horse-racing interests from participating in the state’s online poker scheme. SB 51 specifically allows racetracks and advance deposit wagering firms to be eligible for licensing.

There are currently no scheduled hearings on SB 51. With the holidays fast-approaching, the California legislature will convene again on Jan. 7, 2013. According to Harsh Parikh, a gaming attorney with Snell & Wilmer who has been monitoring the legislative attempts related to online poker in California, “the bill is likely to run its normal course with probable hearings in March or April, 2013,” unless the stakeholders involved were to reach an unexpected consensus.

California is the most populated state in the country, with upwards of 37 million residents. Some industry observers believe that it may be the only state with a large enough player pool to go it alone and not be dependent upon partnerships with other states. Nevada and Delaware have already passed online gambling legislation, though Nevada’s is poker-only. Both should be up and running with online sites in 2013, with Nevada expected to be first in the early part of the year. New Jersey is also hoping to get in on online gambling, as the state Senate approved regulations Thursday. All that remains for the bill to become law is a signature by Gov. Chris Christie within 45 days. That bill calls for a full menu of casino games.