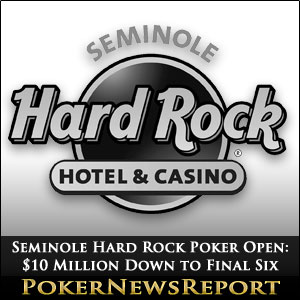 After seven grueling days, which includes three starting flights, the Seminole Hard Rock Poker Open Championship Event is winding down. Six players remain in the hunt for the top prize of over $1.745 million.

Among them is established pro Justin Bonomo. Although he has yet to win a WSOP bracelet, Bonomo’s resume boasts a plethora of high finishes in bracelet and big buy-in events. He finished first in last year’s EPT – 8 Max Super High Roller Reload, second in the prestigious 2-7 Triple Draw event (2011 WSOP) and has cashed in 16 other bracelet events – all before his 28th birthday.

Also in the hunt is 2008 WSOP $2,000 NLHE bracelet winner Blair Hinkle. Besides winning a bracelet, Hinkle is the winner of the largest recorded prize in Full Tilt Poker’s history ($1,162 million). He has cashed in 16 WSOP events and won a WSOP circuit event back in 2010.

Bonomo will enter Day 5 with 18.5 million chips and Hinkle 22.8 million. Ray Qartomy, a highly regarded tournament grinder, sits comfortably in third with 13.05 million, Mukul Pahuja in fourth with 10.2 and Spaniard Samuel Guilabert with 4.675. This will be Guilabert’s first significant cash in the United States. His previous cashes and four titles have all taken place in either Spain or Croatia.

Bringing up the rear is Greg Lehn with 2.2 million chips, good for only 14 big blinds. Greg is a relative unknown on the poker scene – Hendon reveals that he’s only cashed in one other tournament. His lifetime winnings – a paltry $1,160. Lehn’s historic run is just another example of how anyone, on any given day, can win a life changing money playing tournaments. Although low on chips, one well-timed double up and Lehn will be right back in the thick of things.

Twenty-one players started Day 4, including established pro David “Doc” Sands. Sands would be eliminated in 15th when his K♠Q♥ lost a virtual flip to Qartomy’s A♠9♦. After that, players began falling in rapid succession, and before long the unofficial final table of 10 was set.

Old-timer Larry Klur would be the final table bubble boy. After going all-in on the river, Klur would be snap-called by Hinkle, who rivered a set of Kings. Although Klur told Hinkle that he rivered him, whether Klur told the truth or not will forever remain a mystery.

Griffin Arnold would be the next to fall when his J♣10♥ fell to the A♠K♥ of chip leader Blair Hinkle. The board ran out A♣J♠6♥K♠4♥ and Griffin would be sent to the rail. After the knockout, Hinkle was sitting pretty with more than 200 big blinds, a staggering amount at that stage of the tournament.

Derrick Cutler would be eliminated in eighth by Justin Bonomo in a more than 8 million chip pot. All the chips went into the middle on a flop of Q♥3♥2♦. Bonomo held A♥Q♦ to Cutler’s dominated Q♣J♣. The turn and the river would brick out.

On the last hand of the day, Guilabert shoved for 2.2 million and Panagiotis Nifakos called with his remaining 1.615 million. Nifakos flipped over Q♠Q♣ and Guilabert showed a King. The flop would come King-high, and Nifakos would not improve. The final six were set.

Action will pick up on Wednesday at 12:00 noon EST, and will not stop until a winner is declared. Check out Seminole’s live updates page for hand-for-hand coverage.