In what amounts to one of the biggest tournaments of the year, the Seminole Hard Rock Poker Open Championship Event draws 2,384 entries. 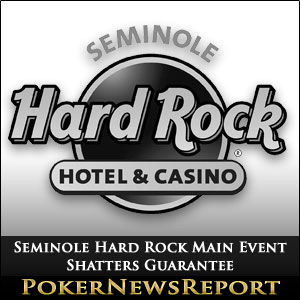 In what amounts to one of the biggest tournaments of the year, the Seminole Hard Rock Poker Open Championship Event draws 2,384 entries.

The tournament, which featured three starting flights, is on pace to conclude by tomorrow. Currently, 38 players remain.

Only a handful of live tournaments pay out over $1 million for first place – the Seminole Hard Rock Main Event will pay out seven figures to the top two, with first receiving a whopping $1.7 million and second $1.1 million. In total, 338 players would make the money, representing a rather large portion of the starting field. Due to this generous payout structure, a min-cash was worth only $7,500 – not even 1.5 times the initial buyin.

The tournament featured unlimited rebuys through the first several levels, prompting several players – day 2 chip leader Justin Bonomo included – to fire multiple bullets. Bonomo tweeted that he would need to finish 63rd or better to turn a profit. Luckily for him, Justin is still hovering around the top of the leaderboard.

Notable players that exited in the money include: Joseph Cheong, actress Shannon Elizabeth, Nick Schulman, David Benefield and Chino Rheem. Although responsible for busting the bubble boy, Rheem would be eliminated shortly thereafter.

Besides Bonomo, there is a laundry list of formidable poker pros still in contention for the title including David “Doc” Sands, Adam Levy and chip leader Amir Lehavot.  Amir is a former bracelet winner and current WSOP Main Event November Niner. He currently sits with 4.3 million in chips.

Also running at the Seminole is the WPT Alpha8 Super High Roller event. Featuring an otherworldly $100k buy-in, the event has only drawn 14 players through level 4. In lieu of this, registration was extended through 8 pm. At least several more players are expected to join. Notables include Andrew Lichtenderger, Jason Mercier, hedge fund manager Bill Perkins, Eric Seidel and November Niner JC Tran.