Chilean Nick Yunis and 104 other players raised $14,700 for charity in the prelude tournament to the $10 million guaranteed Seminole Hard Rock Poker Open. 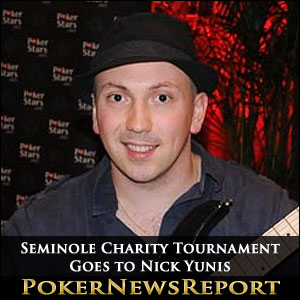 Chilean Nick Yunis and 104 other players raised $14,700 for charity in the prelude tournament to the $10 million guaranteed Seminole Hard Rock Poker Open.

Although the warm-up events for the Seminole Hard Rock Poker Open have been running for more than two weeks, the prelude tournament to the $10 million guaranteed “Championship” event was a $280 + $20 buy-in Big Stack Turbo played for charity.

Of course, there was also $14,700 in prize money up for grabs, plus a customised guitar and a seat in the $5,300 Championship event for the winner of the charity event, with a $5,000 LAPT Bahamas package donated by PokerStars for the runner-up.

Stars Turn Out for Charity

The tournament attracted both stars of the poker world and a number of celebrities from the sports world, TV and radio. The most recognisable poker faces at the tables included Natasha Barbour, Amanda Musumeci, Matt Affleck, Darryl Fish and Jared Jaffee; while Miami Heat Power forward Udonis Haslem and teammate Norris Cole were joined at the tables by Real Housewives of Miami stars Karent Sierra and Joanna Krupa, pop stars Ryan Cabrera and Nate Morris (from Boyz II Men), and 940 AM WINZ personality Andy Slater.

Only the final nine players were going to share in the money and, the bubble burst deep into Level 19 when Natasha Barbour was first crippled by Chance Kornuth (Q♦ Q♠ > A♠ K♠) and then eliminated by Kornuth A♣ J♠ > A♦ Q♦ (!). Barbour picked up a consolation prize of a night´s accommodation and dinner at the Seminole Hard Rock in Tampa for busting out in tenth place, while Chance Kornuth took the chip lead to the final table.

It All Kicks off in Level 22

Despite levels only lasting fifteen minutes, it took another three levels of play to see the first elimination from the final table – but once one fell, a domino effect followed. TV star Joanna Krupa had played well to reach the final table, and she was being enthusiastically railed by her “Miami” colleagues, but Krupa busted in ninth place after getting all-in with 7♠ 2♦ on the board of K♥ K♣ A♥ / 2♥ / 7♥ and finding that Daniel Weinman had 9♦ 9♠ for a better two pairs.

Joe Galloway was bust in eighth place when his 7♦ 10♦ failed to improve against Deborah Mitchell´s 8♥ 8♠, and then Nick Yunis bust both Chance Kornuth (K♦ 9♥) and Andy Slater (J♠ 9♣) in the same hand when his 10♦ 3♥ flopped two pairs. Deborah Mitchell was also eliminated in a three-way pot – her 7♣ 8♦ pairing on the flop against Mark Hoke´s K♣ Q♥ and Daniel Weiman´s J♣ 9♦, but Weinman caught the 9♣ on the Turn to send Mitchell to the rail in fifth place.

And It´s All Over One Level Later

Down to four players there was no deceleration of the action. Daniel Weinman knocked out Zoltan Czinkota in fourth place with a flopped Queen-high flush, but then lost all his chips to Nick Yunis J♥ K♥ > A♠ 2♠ when Yunis flopped a pair of Kings, which improved to trips on the Turn. Going into the heads-up, Nick Yunis had a massive chip advantage against Mark Hoke, and the charity tournament soon came to an abrupt conclusion.

Yunis had been shoving all-in with practically any two cards, and eventually Mark Hoke made a call:

It did not look good for Mark Hoke when the cards were on their backs, and one solitary diamond in the flop of A♠ 10♠ 4♦ did not help matters. However, the 5♠ on the Turn put him ahead in the hand, only for the K♥ to spike on the River to give Nick Yunis a gutshot Broadway straight and victory in the Seminole Charity Tournament.