Day 3 of the WPT Prague Main Event saw the money bubble burst, big stars leave the tournament and a new name at the top of the leaderboard – Ognjen Sekularac. 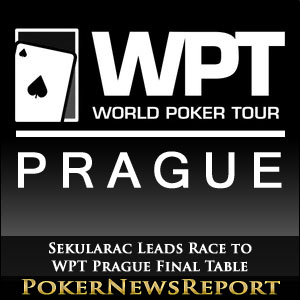 Day 3 of the WPT Prague Main Event saw the money bubble burst, big stars leave the tournament and a new name at the top of the leaderboard – Ognjen Sekularac.

The WPT Prague Main Event resumed yesterday with sixty-three players returning to the Card Casino for Day 3 of the tournament. With only thirty-six of them due to cash in the event, play was expected to be rather subdued during the first couple of 90-minute levels; and those who left the tournament within the first few hours were pretty unlucky to do so.

One such example was the unfortunate Peter Boros. Boros (2♣ 5♠) had called Yann Dion´s min-raise during the pre-flop round of betting, and seen the very nice flop of 5♦ 4♣ 2♥ and Turn of 5♣ to give him a Full House. Boros sought to get some value after the River (J♥) by betting a further 20,000 chips, but Dion put him all-in and then turned over J♦ J♠ for a better Full House.

After two levels of play, the chip lead had been regained by Vasili Firsau – the combined Day 1 chip leader – courtesy on a backdoor flush against an opponent with pocket Kings and the elimination of Nazim Gullaud 8♦ 8♥ > A♠ K♣. However, Scott Augustine then took over at the top of the leaderboard when his K♦ K♠ held against Vinny Pahuja´s 7♥ 7♠ and Jan Ramik´s A♣ J♠ for a dual KO, until Ognjen Sekularac made a remarkable recovery to take the chip lead on the bubble.

Ognjen Sekularac had been reduced to his last 90,000 chips during Level 15 (blinds 1,500/3,000 – ante 500), but a super-hot run propelled him quickly to the top of the WPT Prague Main Event leaderboard. Sekularac started his comeback by cracking Samantha Cohen´s Aces with a rivered set of Sixes (that was how close he was to being eliminated) and then doubled-up again when his pocket Eights held against Scott Augustine´s A♠ K♥. A further double-up against Kara Scott (10♦ 10♠) with a flopped set of Nines enabled Sekularac to double-up again – and take the chip lead just as the bubble burst.

Following the dinner break, the habitual rush to the cashier´s desk ensued – but not due to the standard double-or-bust policy which is often adopted by short-stacked players in these situations. Desislav Velikov seemed to found the right time to get the last of his chips in with A♣ 7♦ when he received a call from Emil Mattsson (A♦ 3♦) until three diamonds appeared on the board to send Velikov to the rail in thirty-sixth place, and Jan Susicky must have believed he was set for a double-up when his A♥ Q♥ flopped two pairs against Piotr Pietrzak (Q♦ J♦) only for Pietrzak to complete his Flush on the River.

Vasili Firsau regained the chip lead yet again when busting out Arkadiusz Olszowy in thirty-first place A♣ A♥ > A♦ 8♦, but it was snatched back from him by Scott Augustine when he eliminated Yann Dion in twenty-eighth place A♠ A♦ >A♣ 3♣. Ognjen Sekularac took over at the top when his 10♣ 10♠ took a big pot from Roger Hairabedian (8♦ 9♦), but Vasili Firsau then became the first player to top a million chips when forcing Samantha Cohen out of a valuable pot.

Sekularac and Firsau continued to boss there tables – and establish a significant chip lead over the rest of the field – and it was Ognjen Sekularac who finished the day as chip leader after flopping a set of Tens in a 300,000 chip pot against Andrey Shatilov and Scott Augustine.

Looking Ahead to Day 4 of the WPT Prague Main Event

When the twenty-one players who remain in the tournament take their seats at the Card Casino in Prague they will be entering Level 20 (blinds 5,000/10,000 – ante 1,000). The plan for Day 4 of the WPT Prague Main Event is to play down to a final table of six which will be concluded on Saturday, and you can find out who wins the €206,230 first prize by following PokerNewsReport.