Scott Seiver won the Party Poker Premier League V and the $500,000 first prize so quick that it was still light outside the Montesino Casino in Vienna. 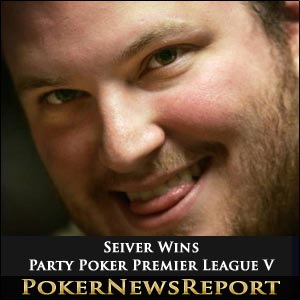 Such was the speed at which Scott Seiver won the Party Poker Premier League V and the $500,000 first prize yesterday that it was still light outside the Montesino Casino in Vienna when the final hand was concluded.

The American poker player, who also collected a seat at the WPT World Championships at the Bellagio in May for his victory – the event in which he won $1.6 million dollars last year – took only twenty minutes to see off the challenge of Dan Cates in the heads-up finale after a day of accelerating action.

Setting the Scene for the Final Day

Due to the format of the Party Poker Premier League, Teeside poker player Matt Frankland started at the final table with a small chip advantage over Dan Cates and Sam Trickett.

Frankland passed a substantial pile of his chips in the direction of Sam Trickett, when Trickett slow-played his pocket Aces early in the day against Frankland´s A♣ K♣. However, Trickett was soon on the receiving end of a Big Slick loss when his A♥ K♥ was no match for Patrik Antonius´ own pocket Aces.

A Quiet Start from Seiver

Possibly due to the 11.00am start for the final table, much of the early action from the other players was very subdued (even Tony G!) – indeed it was nearly an hour before Scott Seiver got involved in a hand, checking through the rounds of betting with an overpair of Queens without seeing any action. Another 3 hours passed before he made any significant contribution to the table – by which time both Sam Trickett and Matt Frankland had both busted out of the game.

Seiver Rolls Over Dwan and Doubles Through Antonius

Tom Dwan, who had been nurturing a small stack for most of the day, was the first player to fall to Scott Seiver – shoving with K♠ 6♥ into Seiver´s 7♣ 7♠ and failing to find a King on the board. Another pocket pair – this time 9´s – enabled Seiver to double up through Patrik Antonius (A♦ Q♠) and by the time Tony G had departed (losing with A♣ K♣ against Dan Cates´ A♦ Q♦), Seiver was up into second place behind Cates and with double the number of chips belonging to Phil Laak and Patrik Antonius.

Antonius departed in fourth place within minutes of Tony G´s elimination – running A♠ 9♥ into Phil Laak´s Q♦ Q♠, and although Laak´s double stack gave him a fighting chance of capturing the Premier League Crown, a major loss with A♥ 10♣ against Dan Cates´ shove with K♠ 8♠ (the King pairing on the turn) and then a big fold when running behind to Cates´ K♣ 8♠ crippled Laak and he was soon to depart in third.

Thanks to a big pay-off prior to Laak´s departure, when Seiver hit trip 8´s to master Cates´ pair of Queens, the two players started the heads up with almost identical chip stacks. Seiver´s live poker experience showed as he bullied Cates out of pots right from the very first hand – revealing pocket Kings in one of the first hands of the heads-up to set the scene. Soon Seiver had a 2:1 chip advantage without any hand going to showdown and Cates had to do something to stop the leak.

Dan Cates chose to shove with pocket 7´s and was called by Seiver holding K♥ Q♠. The flop of 10♥ 10♠ 4♥ kept Cates in the lead, but the 3♥ on the turn gave Seiver Flush outs in addition to his gallery cards. In the end the hearts draw was immaterial, as the K♠ on the river wrapped up the title and first prize of $500,000 for Seiver.