After the opening flights of the PartyPoker WPT Montreal Main Event, Day 1A chip leader Sebastien Drolet-Poitras will be in control as the three fields combine. 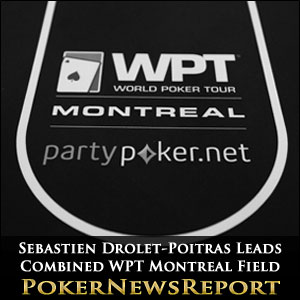 After the opening flights of the PartyPoker WPT Montreal Main Event, Day 1A chip leader Sebastien Drolet-Poitras will be in control as the three fields combine.

Day 2 of the PartyPoker WPT Montreal Main Event gets underway at the Playground Casino in Quebec today with Canadian poker player Sebastien Drolet-Poitras leading the 357 players who survived the three opening flights of the event.

Not All The Stars Doing So Well

Although the majority of the field is comprised of well-known, regular attendees of World Poker Tour Main Events, not all have faired so well. Dual WPT Champion Marvin Rettenmaier, Ebony Kenney, Faraz Jaka and Jared Jaffee all fired two bullets in the $3,850 buy-in re-entry event – and bust both times.

Party Poker´s Mike Sexton and Kara Scott also failed to make it through to Day 2 having re-entered the event after busting out of their opening flight, while the British challenge of Chris Moorman (playing his first live poker event in decades) and Liv Boeree was also snuffed out early into the tournament.

Several players took two attempts to develop a decent stack of chips – including Yann Dion (bust out of Day 1A – finished Day 1B with 173,200 chips), Dann Heimiller (bust out of Day 1B – entered Day 1C and finished with 54,000 chips) and Shawn Buchanan (bust out of Day 1A, took a day off and came back on Day 1C to bag and tag 34,900 chips) – but they will still have to go some to catch the overall chip leader – Sebastien Drolet-Poitras.

Looking Ahead to Day 2 of the WPT Montreal

When the 357 players still alive in the Party Poker WPT Montreal reconvene at the Playground Casino this afternoon they will be entering Level 11 (blinds 600/1,200 – ante 200). Thirty players including are in the < 20 Big Blinds danger zone, including Anthony Zinno (19,200 chips) and Scott Seiver (15,900 chips), so there should be some frenzied action during the early levels.

Those who can – if they wish – take things a little easier include: