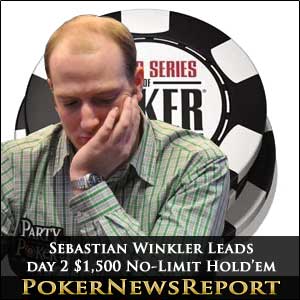 Germany’s Sebastian Winkler holds the chip lead with 1,156,000 after day two of event #48, the $1,500 No-Limit Hold’em tournament, at the World Series of Poker (WSOP) in Las Vegas last night.

The Rio All-Suite Hotel & Casino’s Amazon Room witnessed a thrilling day as 340 were eliminated, with second-placed Stout picking up a massive pot to leap up the leaderboard with about 120 minutes left of the day’s 10 levels.

The flop showed Jd-4c-Qc and Wiley quickly fired out 200,000, only for Stout to go all-in for approximately 390,000. Wiley did not look happy, but he had invested too much in this pot to fold and made the call to see that his Kc-Jh was in all sorts of trouble against Stout’s Ah-Ac.

The Qd turn was nice for Stout as Wiley now required a jack to collect the pot. But the 3d arrived on the river and Stout picked up a massive pot to take a big chip lead over the remaining contestants.

However, Stout is not the last well-known player left in for tonight, with Vegas pro Mike DeMichele (153,000) – in 26th – and Ukrainian-born American Yevgeniy Timoshenko in 24th on 195,000 still battling away.

The final 30 players resume this evening for a third day, although there is every likelihood we will again witness a fourth day in what has become the norm at this summer’s WSOP.