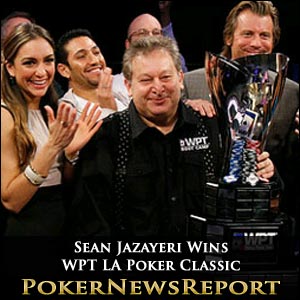 American amateur poker player Sean Jazayeri has picked up the biggest prize of his career after seeing off numerous big-name pros to win the $10,000 buy-in main event at the LA Poker Classic (LAPC) for a huge $1,370,240 pay day.

It took six days’ play for Washington State’s Jazayeri – who had not cashed in 2012 before this victory – to emerge victorious from the World Poker Tour (WPT) event at the Commerce Casino in California after seeing off fellow American David ‘Doc’ Sands in their heads-up encounter.

Jazayeri started the final day as chip leader once the field had been chopped back from its original 549 entries – for a $5,270,400 prize pool – to just the six-handed final table as the amateur eyed up the biggest prize so far of the WPT’s 10th season.

Having made a stuttering start to this year, Jazayeri certainly returned with a massive bang to easily pick up his biggest ever cash – approximately 29 times the $48,051 he secured for his runner-up spot from the $2,000 buy-in No-Limit Hold’em event at last March’s Wynn Classic in Vegas.

Incredibly, it was all over just two hands later, but not before all the chips hit the table on 89th hand.

The K♠ 10♣ 5♠ flop was just what Sands wanted to see as he held top pair and looked set to double-up. The J♣ turn ensured that he stayed in front, meaning Sands just had to avoid a five or queen to be right back in the head-to-head.

However, the 5♥ came on the river to give Jazayeri trip fives, the hand, the tournament, a WPT crown and the huge cash prize.

Jazayeri Leads From the Front

Day six started with Jazayeri heading a stellar six-handed final table, but that was cut back by one as short stack Somerville hit the rail in sixth place after just two hands.

The other four players folded before Somerville showed 8♦ 8♣ and Jazayeri revealed A♦ Q♦. The 7♥ 4♥ 4♣ flop changed nothing, while the 2♠ turn meant he just had to avoid and ace or queen to double-up.

But the Q♥ was placed on the felt by the dealer and Somerville was eliminated as Jazayeri added to his chip lead at 5,180,000.

Jason Burt Out in Fifth Place

Burt – who had started the day fifth in chips – was next to hit the rail in fifth place just 10 hands later, still during level 28.

Marina Del Rey’s Burt had steadily increased his stack to 1,935,000 – although that still meant he was the short stack – and took the opportunity to make a move in the small blind by raising to 160,000 after the action had folded ahead of him.

Big blind Kelly called to see a flop of K♦ 4♥ 3♥, which then saw Burt make a 180,000 continuation bet. Kelly once again made the call. The Q♠ arrived on the turn and Burt chucked in 370,000 chips, leaving Kelly to take a moment before moving all-in.

Burt then sat back, collected his thoughts and called with K♥ J♣ to hold top pair, while Kelly showed J♥ 10♣ for an open-ended straight draw.

Just needing to avoid a nine or ace, Burt was in line to double-up but was sent crashing out when the A♦ arrived on the river to complete Kelly’s straight.

Under the gun, Jazayeri raised it to 210,000, with Kelly calling from the button and small blind Schwartz re-raising all-in for 1,565,000 in total. Chip leader Jazayeri re-shoved for 7,955,000 and Kelly folded for a showdown.

Schwartz showed A♣ J♥ and Jazayeri laid down K♣ K♥ for the latter to be ahead – and then stay there – as the 10♣ 6♠ 6♥ flop arrived. The 9♠ and 10♦ turn and river changed nothing and that was that for Bay Harbor Island’s Schwartz.

Play had been fast and furious up to this point, but things slowed down slightly – until Kelly was hitting the rail in third place after hand 69 during level 30.

Kelly secured some more outs on a 7♥ 4♥ 4♠ flop as any seven would nullify Sand’s hand by giving the former a higher two pair, although he was still behind at this point.

The 4♣ on the turn didn’t change much, leaving Kelly needing a four, jack or king to take the pot down, while a seven would result in a split.

However, the river was the 3♥ to give Sands the knockout and the chip lead on 8.5 million to Jazayeri’s 7,980,000 as heads-up play began. Twenty-one hands later we had our winner in Jazayeri.

A total of 54 players were paid, with the unfortunate bubble boy being none other than eight-time World Series of Poker (WSOP) bracelet winner Phil Ivey – the season six LA Poker Classic winner from 2008 – when his pocket sixes lost out to David Baker’s kings on the final hand of Day 3.

But the list of big-name pros to miss out, alongside Ivey, on making the money is even more impressive – with the likes of Team PokerStars Pros Bertrand ‘ElkY’ Grospellier, Daniel Negreanu, Jonathan Duhamel and Vanessa Selbst falling some way short.

However, Brooklyn’s Selbst did enjoy a successful LAPC after earlier picking up $140,295 for taking down the $5,000 buy-in No-Limit Hold’em event the day before the main event start.

The next WPT stop pulls into San Jose’s Bay 101 Shooting Star for five days from March 5 until the ninth, before then travelling to continental Europe for the WPT Vienna, which runs from April 10 to 15 at the Montesino.