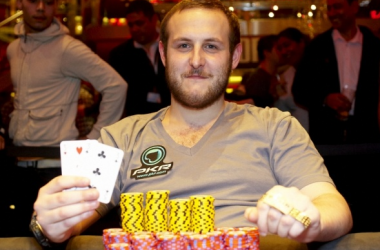 Scott Shelley has won Event 3 of the 2010 World Series of Poker Europe afer defeating JP Kelly heads-up. The event saw 582 players buy-in to the £1,075 No-Limit Hold’em tournament and it took three days to complete (Day 1A, 1B, 1C and then Day2 and Day3). Day1 saw the 582 field chopped down to just 80, play resumed the following day from those nine tables to just nine players who then came back to take their seats the following day to battle it out for the WSOP bracelet and the first place prize of £133,857.

All eyes were on 24-year old JP Kelly on the final day however because he had the opportunity to break several records. JP Kelly could have broken Phil Ivey’s record for being the youngest player to win 3 WSOP bracelets (still time for this one because Ivey was 26). Last year he won a bracelet in Vegas then took down this very event at last years WSOPE becoming on the second player in history to win one of each (the other player being Jesper Hougaard). The win would also have seen him become only the fifth player in history to defend a Hold’em bracelet by winning it in two consecutive years. Other players with this record are:

JP Kelly was well aware of the records in his sights but had his work to do at the final table entering it third in chips and almost half behind the chip leader Kaveh Payman however he started well by eliminating Nicky Katz after hitting a straight on the turn to beat Katz’s pair of Aces. Then a little while later it was Shelley’s turn to cripple his opponent when he amazingly shoved all-in from the small blind only to be instantly called by  Karim Jomeen who revealed pocket Aces with Shelley holding just 74. The flop of J54 gave Shelley hope and the turn astonished the table as it was revealed the 4 giving Shelley a set of fours and the river rubbed it in for Jomeen because it was the 7 to give Shelley a Full House leaving him with just 6,000 chips and shortly after he was eliminated in 8th place.

After a one-hour dinner break the action really heated up and four players were elminated within just one hour. The first of those to go was Jack Lyman in 7th place after Shelley again got lucky. After raising and being re-raised, Lyman moved all-in and was called by Shelley. Lyman revealed AQ while Shelley revealed AJ and after the flop of 1042 it was looking like Lyman would once again double up thanks to Shelley however the turn brought the J and Lyman showed his frustration by throwing his hands up in the air. The river was the 2 and once again Shelley escaped a hand after being dominated pre-flop.

Mehdi Senhaji was next to go after his A8 failed to improve on the board when Shelley called him with 77 sending him out in 6th place and next to go was the chip leader at the start of the day – Kaveh Payman. Payman shoved all-in with A10 and was called by JP Kelly who was holding AK but again the board did nothing for either player so Payman was out in 5th place. Paul Pitchford was next to go when was all-in with his last 11,000 chips and got the call from JP Kelly. Pitchford held 95 and was dominated by Kelly’s A5 and the board of 833105 leaving Pitchford eliminated for a £40,862 payday because Kelly’s Ace was in play.

This left it to a three-way battle between Scott Shelley, JP Kelly and Jeppe Bisgaard for the bracelet and £133,857 payday. It wasn’t too long before Bisgaard shoved all-in holding 109 and disappointingly shook his head at his friends on the rail when Kelly called and revealed A9. The flop came Q74 to give Bisgaard hope, needing just another club to make him a Flush however the turn was 2 and the river was K to eliminate him in third place and set up a heads-up battle between Shelley and Kelly.

Big pots exchanged hands in heads-up play and the chip lead was constantly changing. The final hand saw Shelley raise on the button only for Kelly to announce all-in and Shelley instantly called revealing 33 as Kelly revealed QJ. The dealer then revealed the flop of 358 to send Shelley’s rail mad with excitement and leaving Kelly disheartened needing a micracle runner-runner to break all of those records. It wasn’t to be for Kelly however and the dealer revealed the turn of 7 and the river of 10 to finish Event 3 and give Shelley his first WSOP bracelet and £133,857 payday. Shelley is no stranger to poker, the 24 year-old works for 3D poker site PKR as a customer support agent and was humble in victory by stating JP Kelly was the one player he was hoping to avoid heads-up but despite that Shelley proved victorious.