David “Doc” Sands may have been the one in the wheelchair, but it was Scott Seiver who enjoyed the sickest run to take down the PCA Super High Roller 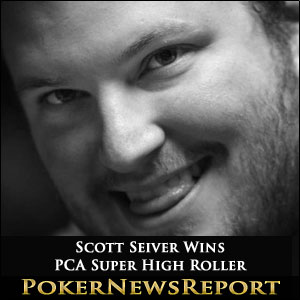 David “Doc” Sands may have been the one in the wheelchair, but it was Scott Seiver who enjoyed the sickest run to take down the PCA Super High Roller

The 10th anniversary PokerStars Caribbean Adventure got into top gear yesterday, with the conclusion of the $100,000 Super High Roller being played out at the Atlantis Resort in the Bahamas. David “Doc” Sands – confined to a wheelchair after twisting an ankle playing basketball – led the way at the start of play, and was favourite to capture the $2,003,480 first prize with 45 percent of the chips in play.

Seiver and Schulman Cause the Early Damage

Within 30 minutes, the field had been reduced to just five players, as first Scott Seiver and then Nick Schulman caused carnage amongst the short-stacks. In just the third hand of the day, Siever (A♣ A♥) tripled up against Greg Jensen (K♥ Q♥) and Dan Shak (K♦ J♦ – Shak eliminated in eighth) when hitting a full house Aces over Nines and elevated himself immediately into second place. “Honestly it’s much, much better than the start I envisioned” he quipped afterwards.

Nick Schulman recovered second place in the chip counts after he too was dealt pocket Aces (A♠ A♥), and made an easy call against Vladimir Troyanovsky´s shove with 10♥ 10♣. He then consolidated his position by busting out Greg Jensen in a K♣ K♥ > A♦ 5♥ race – Jensen generously donating his $286,200 sixth place prize money to the victims of the school shooting in Newtown, Connecticut.

Seiver Nicks some from Schulman and Gets Gruissem

As the levels rose, so did Scott Seiver´s chip stack. First he forced Nick Schulman out of a 600,000 chip pot and, as the blinds increased to 30K/60K (Level 19 – ante 10,000) he shoved from the small blind with K♠ Q♠ against the short-stacked Philipp Gruissem (A♠ 8♣). Gruissem called, and then winced as the Q♥ was dealt on the flop. With no Ace to save him on the tail of the community cards, Gruissem was eliminated in fifth for $400,700.

Nick Schulman took his revenge on Scott Seiver for forcing him out of the earlier pot when rivering a three-outer (K♠ 10♥ > K♣ J♦) to double up – a feat also achieved soon after by Cary Katz (Q♦ 9♦ > A♥ 2♠), who was nursing his last handful of blinds as best he could. Even David Sands, who had been notoriously quiet all day, got some of Seiver´s chips – his 5♠ 2♠ pairing with the 5♥ on the board and mastering Seiver´s K♣ 6♠.

As play entered level 21 (blinds 50K/100K – ante 10K), Scott Seiver recovered his composure. Now last of the final four players, he spiked an Ace on the turn to double up against Cary Katz (A♦ 7♠ > 9♦ 9♥) and then took uncontested million chip pots from both David Sands and Nick Schulman. More pre-flop pressure on Sands and Schulman saw Seiver rise to the top of the chip counts for the first time.

David Sands battled back with the elimination of Cary Katz (5♦ 5♣ > A♠ J♥) prior to the dinner break, and then took a 2½ million chip advantage into the heads-up when his 10♠ 10♦ hit a set on the flop to bust Nick Schulman (K♠ 6♠) in third. A short delay preceded the climax of the PokerStars PCA Super High Roller while Scott Seiver attempted a deal; but David Sands was having none of it, and play continued with Sands holding an 8.60 million v 6.15 million chip advantage.

David Sands extended his lead when hitting a set of running Jacks to defeat Scott Seiver´s flopped top pair, but Scott Seiver is nothing if not resilient and, after rivering a diamond flush to get back on terms, four-bet shoved for his last 6.72 million with 9♥ 9♦ into Sands´ 10♣ 10♥. The 9♣ on the flop gave Seiver a set and a 12.5 million to 2.25 million chip advantage.

The final hand came quickly, and in terms of what had preceded in the tournament was pretty subdued. David Sands shoved the last of his chips into the middle with K♥ 4♦. Seiver made the call with A♣ 7♠ and watched as the dealer dealt out Q♦ 8♦ 5♦ (giving Sands the chance of a flush) / 9♥ (improved Seiver´s chances of hitting a gutshot straight) / 3♥. Both players had missed every out they had and Scott Seiver won the PokerStars PCA Super High Roller courtesy of his Ace high hand.