Scott Seiver reckons he took the “opportunity to push and press hard” for victory when he realised that the final table during the World Poker Tour’s $25,000 buy-in World Championship event in Las Vegas had been playing “a little soft, a little scared”. 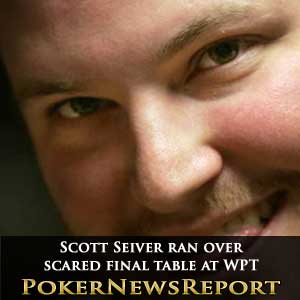 Scott Seiver reckons he took the “opportunity to push and press hard” for victory when he realised that the final table during the World Poker Tour’s $25,000 buy-in World Championship event in Las Vegas had been playing “a little soft, a little scared”.

The Ohio star, with one World Series of Poker bracelet to his name, battered the final table to pick up one of the sought-after events on the poker calendar and the $1,618,344 top prize that went with his success.

The Brown University graduate, who saw off 219 other players to collect his first WPT event, had previously earned $2.3 million in tournament cashes, so has most definitely hit the big time in an impressive manner.

The 26-year-old, who now lives in Vegas, held off Farzad Bonyadi – a winner of three WSOP bracelets – after entering their heads-up clash with a 3-to-1 chip lead.

Remaining aggressive during the closing stages, Seiver kept up his severe pressure on the Iranian pro – and, when it came to the last hand, both bet and called to the river card for a board that read 10c-2s-6d-Qc-Ks.

Still with a chip lead, Seiver announced that he was going all-in. Bonyadi took almost five minutes to reach his decision, but made the call. However, he was stunned to see Seiver flip over Js-9d for a straight that beat his two pair from Qs-10h hole cards.

Seiver claims he was never really worried as Bonyadi deliberated over his decision, stating that “it was the best feeling in the world when he didn’t call immediately”.

He correctly believed that he had “finally got the best hand” and was sure that this was “going to be the moment” when he took down the big prize.

He added that, “when he didn’t fold right away”, he was certain that “he wanted to call”, possibly because Bonyadi “was frustrated from the heads-up” and was eager “to see my cards – wanted to see if I was bluffing”.

Incredibly, once the event had been reduced to just three players – with the other being this year’s PokerStars Caribbean Adventure (PCA) champion and one-time chip leader Galen Hall – Seiver was able to pick up six successive pots at one stage.

Seiver, whose sole WSOP bracelet came back in 2008 with success in the $5,000 No-Limit Hold’em event, had prepared a strategy to “wait and see how the rest of the table played”.

Once he realised that the final table was playing “a little soft”, he “thought it was “a good opportunity for me to push and press hard” for the seven-figure top prize.

With his plan in place for the last of the six days’ play, Seiver chipped away at Hall’s lead by raking in chips by continuously stealing blinds at The Bellagio. After taking the lead, Seiver was never again headed.

Curiously, though, Seiver decided to “throw nubs” with his friends instead of the conventional high fives when the pro secured a pot at the final table.

So, when picking up a pot, he would turn to face his cheering friends to lift his elbows towards them – and explained that, as they had “been throwing nubs” for around 18 months, he felt that they “had to keep the tradition” going.

As well as picking up his biggest pay day, Seiver – who is best known as a cash player – has secured his seat at next year’s event.