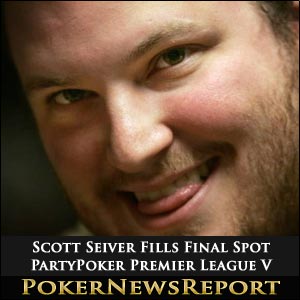 Seiver is obviously thrilled to be joining the likes of Team PokerStars Pros Bertrand ‘ElkY’ Grospellier and Vanessa Selbst, Team Party Poker Pro Tony G, Phil ‘The Unabomber’ Laak, Patrik Antonius and Tom ‘durrrr’ Dwan for the televised tournament, and told the PartyPoker blog: “I cannot wait to play the PartyPoker.com Premier League – I love the format and I am looking to go in and stir it up. Table talk is an important part of my game.”

The PartyPoker Premier League V tournament – to be presented by Team Party Poker Pro Kara Scott – will feature 16 players battling it out for supremacy, the title, a huge cash prize and a $25,000 seat at the WPT World Championship at The Bellagio in mid-May.

The event, which will also see two players qualify through the televised play-offs, is being staged as part of the PartyPoker.com-sponsored WPT Vienna festival that will include a €3,500 buy-in main event from April 10 to 15, as well as the Party Poker Big Game VI on April 11 for its usual 48-hour tournament.

The two spots still to be filled at the Premier League V will be decided through two qualifying tournaments that start on Sunday, April 1, when 24 players – 12 of which will be invited and 12 of whom have qualified online – line up for the play-offs that will keep the internet players separate from the pros.

The Premier League will retain its usual format, meaning the leading three points-earners from the two eight-player groups will advance to the eight-player final table, where they will be joined by two others following the result of a series of heads-up meetings between the fourth and fifth placed players.

The 14 pros certain to make the PartyPoker Premier League V line-up are: