The poker world has been rocked by a news report that reveals that Canadian born professional poker player Scott Montgomery, who recently announced he is in a relationship with Annette ‘Annete_15’ Obrestad, has been robbed by… 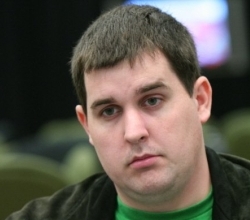 The poker world has been rocked by a news report that reveals that Canadian born professional poker player Scott Montgomery, who recently announced he is in a relationship with Annette ‘Annete_15’ Obrestad, has been robbed by a man in the restroom during a break from a tournament that he was participating in.

Montgomery became a well known poker player when he was a part of the 2008 November Nine in which he finished 5th in the Main Event for $3,096,768 and increased his tournament earnings further by winning the $1,000 No-Limit Hold’em Event in this years World Series of Poker. He has total live poker tournament earnings of $4.1 million.

It seems that the mugger picked his victim well, targeting the poker pro while he was alone in the bathroom. According to the players twitter account, a black male pulled a knife on him while they were in the restroom and after he emptied the $2,000 out of his wallet and handed it over to his attacker, the man left.

The poker pro also issued comment to say that he called for security in the hope that they would be able to catch the attacker but highlighted that it took them 15 minutes to reach him, leaving the man enough time to escape.

Montgomery tells his twitter account follows what he was told by the security, saying that they basically told him “oh well, life sucks, have a nice day”.

A member of the poker forum Two plus Two told their version of the event, saying that the black male demanded money from the poker pro but Montgomery refused to hand over the cash, sparking the attacker to begin to unwrap something that was thought to be a knife or gun.

On seeing the black male present the weapon, Montgomery changed his mind and handed over the contents of his wallet.

It seems that the full details of how the incident happened are still a little shady in areas but one thing is for sure, with the cameras all over the casino floor, the culprit will be revealed sooner rather than later.

The Bellagio will be put into the spotlight following the recent event as this is not the first time that they have failed to protect their players, fellow poker professional Greg Raymer being attacked by a group of men in 2004.

The group of men that attacked Greg Raymer tried to force the pro into his hotel room but with Raymer not the smallest guy in the casino by a long shot, he decided to fight back in fear of his life, putting up enough of a fight to leave the attackers running for safety. Reports of the robbers who attacked Raymer came back after 6 months, with the suspects being arrested and charged for their attempt.