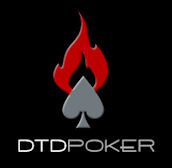 A total of 336 players entered the £100,000 guaranteed event, which featured two opening days and a new re-entry format, but it was 35-year-old Eustace who emerged triumphant yesterday.

However, the ex-pro with English lower-league sides such as hometown club Leicester City, Cambridge United and Mansfield Town had agreed to make a deal with runner-up Lloyd Houston just as they entered heads-up play, with both players collecting £18,100, although it is the former footballer’s name that will appear as winner on the official records of the event as he won the single-card shoot-out.

What was truly remarkable about Eustace’s victory, though, was that he made great use of his final £20 within his DTD poker account to make it through the qualifiers for the Dusk Till Dawn Deepstack event.

It was certainly a brilliant return on investment (ROI) for Eustace as he turned that 20 quid into £18,100.

It should also be noted that an anonymous player earned £12,200 for third place – and is now expected to travel to Las Vegas for the World Series of Poker (WSOP)’s $10,000 No-Limit Hold’em Championship main event at the Rio All-Suite Hotel & Casino. So far, we have no idea who that man is, but maybe we’ll find out once he gets to Sin City…

Final placings and payouts from the 2011 Dusk Till Dawn Deepstack event: