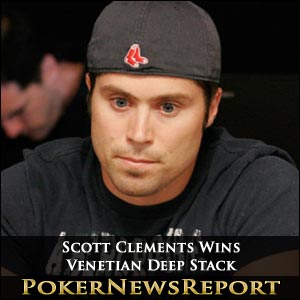 Three days’ play at The Venetian Resort Hotel Casino saw Clements defeat Zachary Fahmie, of Henderson in Nevada, in a heads-up clash that ended with the latter leaving $89,892 richer for his runner-up spot.

Portland’s Ryan Welch, who collected a World Series of Poker (WSOP) bracelet in 2010 for winning a $3,000 buy-in Triple Chance No-Limit Hold’em event, was eliminated in third spot for $60,738.

He now sits on almost $5.5million for his tournament career after taking the biggest share of a prize pool of $607,380 after a healthy 265 players paid the buy-in.

The highest-placed non-American was Germany’s Yunas Jamal, the Berlin player collecting $7,592 for ending the tournament in 18th.

Jamal was closely followed by 19th-placed Canadian Gavin Smith, with the Nevada-based Ontarian entrant picking up $6,681.