American poker player Scott Baumstein established a colossal chip lead during Day 3 of the WPT Amneville Main Event – an incredible 108 big blinds ahead of second placed Anders Rasmusson, and almost four times the average chip stack of the 19 players that remain in the event. 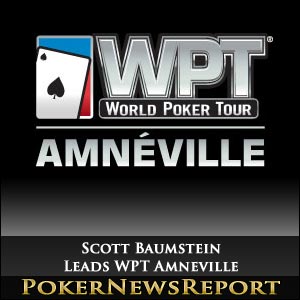 American poker player Scott Baumstein established a colossal chip lead during Day 3 of the WPT Amneville Main Event – an incredible 108 big blinds ahead of second placed Anders Rasmusson, and almost four times the average chip stack of the 19 players that remain in the event.

Baumstein, whose only major live tournament success came in the Heads-Up Championship at the PokerStars Caribbean Adventure last January, now looks favourite to go on and win the WPT Amneville title and $452,816 first prize.

Another Day of Flip-Flop Leaders

Until Scott Baumstein burst into the chip lead, it had been another day of flip-flop leaders. Overnight chip leader Urs Kohler fell tamely away as first Nesrine Kourdourli found pocket Aces to eliminate Mickael “MunchenHB” Telker and take the chip lead, only for Joseph Cheong to take advantage of his position over Anders Rasmusson and take command of the tournament. Rasmussen – who is a $46.00 [geolink href=”https://www.pokernewsreport.com/partypoker”]Party Poker qualifier[/geolink] – got his own back on Cheong when taking a massive pot with a full house over flush, and then caught a backdoor flush to eliminate Gerard Zeitoun and take the lead himself.

Marvin Rettenmaier started the day in third place, and was considered to be one of the most dangerous players remaining in the tournament, but he found himself crippled shortly before the bubble when he moved all-in with 9♠ 7♦ on a flop of K♣ 8♦ 5♠ against Rony Halimi´s A♠ K♠. The Q♠ and 3♠ completed Halimi´s hand and Rettenmaier was sent to the rail a few hands later to be replaced at the table by Scott Baumstein. Baumstein was quick to get into Halimi and became the first player over a million chips when calling the Frenchman´s bluff with a turned flush. Halimi, who would have taken the chip lead with another spade on the river, clung on to get inside the bubble and still remains in the pack going into the penultimate day.

Those who were well-stacked when it came to the bubble were able to take advantage of the antics of Jean Bernard Bros, who ran down the clock for an hour while refusing to participate in any hands as his chip stack was anted away. Other short-stacked players followed the same tactic until Bros was eventually down to his last 500 chip and had to get involved in a hand. Pierre-Yves Bodeux and Nesrine Kourdourli checked through the turn and river, with Bodeux claiming the hand with a pair of Tens and eliminating Bros. Meanwhile, Baumstein, Anders Rasmussen, Joseph Cheong and Arnaud Mattern were betting every pot and collecting the blinds from the short-stacked players at their respective tables to supplement their burgeoning chip stacks.

Scott Baumstein´s leap into the massive chip lead came at the expense of Simon Vitali. Vitali moved all-in with his stack of 496,000 chips after hitting a set of Threes on a flop of A♠ 5♠ 3♠. Baumstein called immediately with 8♠ 6♠ and, needing the board to pair to survive, Vitali saw the K♣ and J♦ ruin his own chances of taking the chip lead as he was instead despatched to the rail. Anders Rasmusson was the only other player to finish the day above a million chips and, although Kourdourli, Cheong and Mattern may still pose a threat to Scott Baumstein, it is going to take some remarkable poor fortune for the American to lose this event.

When play resumes at the Seven Casino d´Amneville, blinds will be 4,000/8,000 with a 1,000 ante. Play is expected to continue until the eight-handed final table is reached and, with eleven of the nineteen players having less than an average chip stack (598,420), that might not take too long!