Scots on a Roll as Hutchinson Wins UKIPT Edinburgh 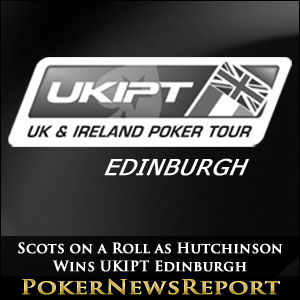 Being a Scottish poker player seems to be a distinct advantage when it comes to picking up UKIPT Main Event titles; and, following Ludovic Geilich´s victory in Marbella, Alan Gold´s win in Galway and Robert Bull´s triumph in London, Dean Hutchinson became the fourth player from Scotland to win a UKIPT Main Event in Season 4 of the Tour when taking down the Main Event in Edinburgh.

Hutchinson is primarily a live cash game specialist in his native Glasgow and, as he and the seven other finalists in the UKIPT Edinburgh Main Event took their seats in the Assembly Rooms yesterday, he was already assured of his largest recorded live poker cash – his Hendon Mob database statistics barely reflecting the success he has achieved in poker.

UKIPT Edinburgh Final is a Game of Two Halves

A “games of two halves” is usually a phrase reserved for soccer games, but it could hardly be more appropriate to describe the action at the Assembly Rooms yesterday. Six players departed the final table within the first three hours of the game getting underway, with it taking another three hours to determine a winner of the tournament.

First to leave was Ciaran Heaney, after he moved all-in from the button with A♥ 10♠ and received a call from Liv Boeree who had been dealt Q♥ Q♣. The flop of 4♠ Q♠ 8♣ put Boeree firmly in control with a set of Queens, although the 5♠ on the Turn gave Heaney hope of a backdoor flush. Unfortunately it was not to be, and the 4♦ bricked on the River to eliminate Ciaran Heaney in eighth place.

Another Soccer Term – as Boeree Scores a Hat-Trick

Within fifteen minutes Michael Kane was also to depart the tournament – again at the hands of Liv Boeree. Kane moved all-in from the Big Blind with Q♠ J♠ and Boeree again made the call – this time with A♠ Q♣. The flop of 8♣ 10♦ 4♠ left Kane needing a Jack or Nine to survive, but neither appeared on the Turn (3♦) nor River (7♣), and Kane was bust in seventh position.

Boeree completed her hat-trick of knockouts with the elimination of Jacobus Visser in sixth place. Visser moved all-in from UTG with 9♠ 6♠, and Boeree called with A♥ 7♠. Visser knew his fate after the flop of J♣ 2♦ A♣, and was out of his seat before the Q♥ and K♦ completed the board. Having dispatched three players to the rail in quick succession, Liv Boeree now had 4 million of the 8.54 million chips in play and was the clear chip leader.

Hutchinson Gets in On the Act and Boeree Busts Another

It took a full level of play until the next player was to depart the final table of the UKIPT Edinburgh Main Event, during which time Liv Boeree had lost the chip lead to Jason Beazley due to losing a handful of small pots to Eldon Orr and Dean Hutchinson. However, she regained her place at the top of the leaderboard by knocking out Orr in fourth place 8♥ 8♣ > A♥ K♠ on a Ten-high board.

As the final table of the UKIPT went three-handed, Liv Boeree had a substantial chip advantage over Jason Beazley and Dean Hutchinson; but after Beazley´s 10♣ 10♠ had taken down a valuable pot against Boeree´s King-high hand, Dean Hutchinson doubled-up against Beazley 10♥ 9♣ > 7♠ 7♣ when both players had Turned a Full House (Hutchinson Tens over Nines > Beazley´s Sevens over Tens). Hutchinson then took over in the chip lead for the first time at the final table when forcing Beazley off of a 1.5 million chip pot with a massive River bet.

Jason Beazley´s demise was completed when he got into a raising war with Liv Boeree in the first hand of Level 27 (blinds now 30,000/60,000 – ante 10,000). Boeree (A♥ K♥) raised to 175,000 chips from the small blind, to which Beazley (10♠ 10♥) responded by three-betting to 360,000. Boeree hardly had the chance to push forward her chips to raise the pot again before Jason Beazley announced he was all-in. The A♦ and two Hearts on the Flop gave the advantage to Liv Boeree, and a third Ace on the River confirmed Jason Beazley´s exit from the UKIPT Edinburgh final table in third position.

Going into the heads-up, Liv Boeree held a 5.32 million -v- 3.045 million chip advantage against Dean Hutchinson, and she quickly extended her lead with victory in a couple of small pots and one major hand in which her A♠ 4♥ best Hutchinson´s Q♠ K♦ to reduce the Scotsman to 1.8 million chips. It could have been all over at the start of Level 28 when Hutchinson´s shove with A♥ 4♦ was snapped-called by Boeree (K♥ K♣), but the board of 5♦ 7♦ 2♥ / J♣ / 3♣ delivered a wheel straight for Hutchinson and the double-up put him nearly back on terms with the chip leader.

Successful bluffs by both players sent chips to and fro across the table, but going into Level 29, the relative chip stacks still remained evenly balanced. The pivotal hand came after 2½ hours of fluctuating fortunes when Dean Hutchinson (A♠ 10♣) rivered the A♣ on a board of 4♥ 9♥ J♠ / 10♥ / A♣ to complete a better two pairs than Liv Boeree (J♦ 9♦); and within 20 minutes it was all over – Boeree shoving with 5♥ 3♣ on a flop of 4♦ 5♠ 6♣ for middle pair and an open-ended straight draw, and Hutchinson making the call with 6♠ 5♦ for two pair.

The K♣ on the Turn added the possibility of a flush draw to Boeree´s repertoire of outs, but the 8♦ on the River crushed her fairytale ending, and Dean Hutchinson was UKIPT Edinburgh champion.