The fourth staging of the PokerStars Spring Championship of Online Poker (SCOOP) has, unsurprisingly, broken all online records for an internet series. 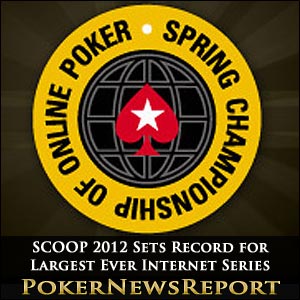 The fourth staging of the PokerStars Spring Championship of Online Poker (SCOOP) has, unsurprisingly, broken all online records for an internet series.

While more stats will become available over the next few days, the numbers already make for impressive reading. With all 120 tournaments either finished or started, SCOOP 2012 has recorded 526,154 entries – easily surpassing the 2010 record of 461,936 by close to 14%.

So, these numbers really are impressive, particularly considering that last year’s SCOOP attracted 403,378 buy-ins from 156 nations and 107,697 individual players for a collective prize pool of $43,165,800.

Buy-In Numbers Up By More Than 30%

Of course, many Americans – including the undoubted star of 2012, Shaun ‘shaundeeb’ Deeb – have upped sticks and moved to another country, so boosting the numbers for this year. However, even the most optimistic of organisers could not have predicted a 30.4% increase in buy-ins this year. Truly, that is an astounding figure.

While the three main events are still running, the numbers from each also provide interesting reading for all you stats fans out there – particularly in relation to the guaranteed prize pools.

Double, Double and Double Up Again!

We at Poker News Report will provide you with the full facts and figures over the next few days, but you can expect more of the same as the final two events continue today.

Then it’s on to the World Series of Poker (WSOP) at the end of the month. But will the world’ biggest live tournament series be able to match the incredible figures of SCOOP 2012? It’s unlikely. But we shall see, we shall see…