Scientists from the University of Alberta claim to have developed a computer program that has a perfect strategy for playing heads-up limit Texas Hold´em. 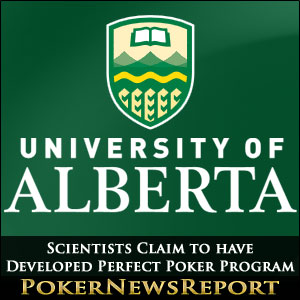 Scientists from the University of Alberta claim to have developed a computer program that has a perfect strategy for playing heads-up limit Texas Hold´em.

According to a paper published at ScienceMag.org, scientists from the University of Alberta have solved heads-up limit Texas Hold´em poker by developing a computer program that plays a game so close to perfect that it cannot be beaten by a human.

The scientists claim that the computer – called Cepheus – will win or break even in the long run, no matter how the game starts or which player is first to act; and they have tested their claims over a billion, billion hands – more than have been played in the history of mankind.

The significance of solving heads-up limit Texas Hold´em poker is that poker is an imperfect game. Whereas in games such as chess – where the chessboard and the pieces on it are visible throughout the entire game – an opponent´s cards in poker are private.

The lack of perfect information increases the complexity of deciding the best course of action – whether to raise, call or fold – and, although the computer will not win every hand played, it will play the hand it is dealt with the optimum strategy and win in the long run.

Cepheus´ poker skills have been developed using regret values. Essentially what the computer does is analyse every hand it plays to see what actions (or lack of actions) it regretted making. Then, when it is in the same situation again, it takes the course of action it regretted not taking previously.

Over seventy days of training, Cepheus eventually eliminated all his (or her) regretful moves to achieve a perfect game – or at least as close to perfect as could be identified. Now, all Cepheus has to do during a game is to search its database of pre-computed game situations to find the optimal course of actions in any given scenario.

Cepheus Proves that Dealer has an Edge

It has been a long-held theory in heads up limit Texas Hold´em that the dealer has an edge despite being the second player to act in the pre-flop round of betting. According to Michael Johanson – a co-author of the study and scientist who worked on the University of Alberta project, Cepheus proves the theory to be true, but only marginally. Johanson said:

We actually can now prove that the dealer has an advantage of what we call ’88 millablinds’ per game. That’s .088 of a big blind per game.

Johanson also explained that building a database of hands was not easy. He said that during the early stages of the training phase, Cepheus started playing randomly against itself with no idea of what it was doing other than following the rules of the game.

How Poker Can Benefit Mankind

Although the Cepheus project was developed to solve the imperfect game of heads up limit Texas Hold´em, co-author Michael Bowling believes that there could be other applications for the program that could benefit mankind.

He cites an example in which a doctor who needs to make a decision about treating a patient could use the methods used in the poker program to determine the treatment options with the best possible outcome or highest probability of success.

Want to Give Cepheus a Game?

Members of the public can take on Cepheus at the University of Alberta´s website. Michael Johanson anticipates getting plenty of emails from players who will declare victory after playing just 20 or 30 hands against the program, but challenges anybody to win over a long session.