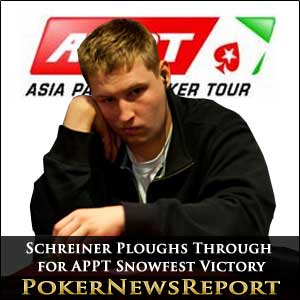 Marcel Schreiner had lead for most of the event after a stunning Day 1B and a titanic battle with Tom Grigg on Days 2 and 3,but it was New Zealand player, Matty Yates who going to make him work hardest if he was going to take the NZ$94,300 (£48,620/$79,700) prize back to Germany.

The Start of the Final Day

As the nine remaining players in the APPT Main Event took their seats, it already had the look of a two-way battle. Schreiner had a 68,000 chips lead over Yates, (blinds 2,500/5,000 – ante 500) with the rest of the field looking like this.

Both players increased their stacks in the early stages – using pre-flop aggression and post-flop raises to reduce the stacks of the other players, and it was just a matter of time until one or other of the seven shorter stacked players took a chance.

Karamalikis Picks the Wrong Moment and an Unfortunate Name

Many poker websites advise online poker players to choose their screen names with caution as they will never be able to change them once their account is registered. Unfortunately Jonathan Karamalikis chose the screen name “xMONSTERxDONGx” when playing on Full Tilt Poker, and also the wrong moment to shove his Q♠ Q♥ into Daniel Laidlaw big blind. Laidlaw was holding K♣ K♦, and with no help for the “Dong” on the board, the APPT Sydney winner was off to the cashier´s desk to collect NZ$10,280 for his tenth place finish.

Matty Marches Back to Lead

The hand after Karamalikis´ departure, Matty Yates lost a massive pot to Marcel Schreiner – his trip Kings coming second the Marcel´s club flush. Down to 400,000 chips, Matty made a hole in Tom Grigg´s stack when his A♠ 10♦ paired on the board, squeezed Carl Know and Tom Grigg both out of 50,00 chips with a massive four bet and got his revenge against Marcel Schreiner when putting his tournament life on the board with K♥ K♦ against Schreiner´s 9♠ 8♠. A flop of 9♣ J♦ 3♦ giving Schreiner hope of trips or two pairs, but the turn of J♠ and river of 3♣ was good enough for Matty to take the pot and now have more than half the chips in play.

After the rapid elimination of four players, the action started to cool down a little. Two one-hour levels passed with not much more than to-ing and fro-ing between the leaders, but after the dinner break it all kicked off again. John Waterman had started his route to a seat at the final table with a freeroll qualifier on PokerStars, and his infinite ROI got infinitely better when he eliminated Carl Knox in fourth (NZ$29,415) spiking the A♣ on the river to pair his A♥ Q♥ against Knox´s 7♠ 7♥. However, his fantastic run was soon to come to an end when his K♠ Q♦ failed to match up against Marcel Schreiner´s 8♠ 8♣ and he left in third with NZ$35,150.

Going into the Heads Up, Matty Yates (1,265,000) held a slight chip advantage over Marcel Schreiner (1,102,000) with the blinds now at 12,000/24,000 (ante 3,000). The early exchanges were timid and at one stage fifteen hands were played without one going to showdown. Marcel, being the naturally more aggressive player, had chipped away at Matty´s stack to gain a slight edge before Matty bounced back to turn the tournament on its head.

After waiting more than two hours for the first all-in confrontation, the second took just minutes. Within just a few hands, Marcel had levelled up the score when Matty (A♣ J♣) shoved from the button into Marcel´s (A♠ A♦) big blind. The flop of Q♣ 3♥ 5♣ and turn of 10♠ gave Matty hope of a flush draw or straight, but the river card – 5♠ – got the chips sliding back across the table into Marcel´s stack and it was game on once more.

Marcel Moves Ahead to Glory