Schock and Awe as Mitch Bags the $2,500 Pot-Limit Hold’em/Omaha Bracelet

Mitch Schock, collected $310,225 as he completed the quartet of Friday winners when he took down the $2,500 Pot-Limit Hold’em/Omaha tournament in the Rio’s Amazon Room by defeating Rodney Brown. 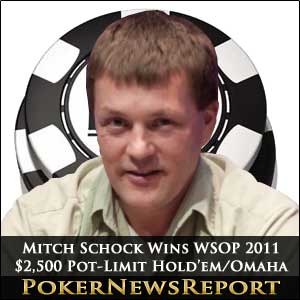 Mitch Schock, collected $310,225 as he completed the quartet of Friday winners when he took down the $2,500 Pot-Limit Hold’em/Omaha tournament in the Rio’s Amazon Room by defeating Rodney Brown.

But, following on from Ukraine’s first WSOP winner in Eugene Katchalov when he triumphed at the $1,500 Seven-Card Stud championship 23 days ago, 40-year-old poker pro Schock emerged as North Dakota’s debut success at the series.

Schock played exciting poker throughout a three-day event that possessed a record entry, with 606 competitors starting in pursuit of that WSOP gold bracelet.

The 40-year-old poker pro also displayed great mental and physical fortitude when emerging victorious from his three-hour heads-up battle against California’s Brown as held the winning hand of double-suited aces that completed the nuts on the flop in a Pot-Limit Omaha round.

Bismarck’s Schock – now at his sixth successive WSOP – has taken quite some time to collect his first crown, having been a professional since the 1996.

But the former construction business worker reckons the long wait has been worth it as he will return home to North Dakota “with the gold bracelet and everyone is going to be patting me on the back – and buying me free drinks!”

The single father of three kids – aged nine to 15 – also admitted that he could do with the big bucks, saying that “this money will come in pretty handy” as, although he is “a simple man (with) a simple house”, he recognises that any extra dollars “is sure going to help out”.

Schock’s success is also a credit to his relaxed manner when under pressure as the dad – who has read over 100 books on poker – likes to “enjoy life”, as well as “have a lot of fun at the poker table”.

But he believes the real secret to his success on Friday is that, after finding himself “burned out earlier this year”, he decided to take a “few months off” to rediscover his enthusiasm for the game.

It worked as, after returning to poker just a short while ago, he then arrived at “the World Series of Poker feeling confident” of playing “as well as I’ve ever played before”.

Having now defeated Brown in their match-up, Schock has a record of one win, five final-table appearances, and 20 cash finishes at the WSOP to have banked $903,699 at the series.

But that’s not all as his five cashes at this WSOP – including three final-table spots – put him within the top five in the race to be crowned of series’ Player of the Year.

The trend of no former bracelet winners making a final table came to an end in this event when San Diego’s Rami Boukai took his place among the last nine, having secured this very title two years ago. However, that was as good as it got this year for Boukai as he exited in ninth place for $23,119.

Meanwhile, 37-year-old runner-up Brown, from Brea, lifted $191,678 for his troubles after realising that being an insurance company executive did not pay as well as playing professional poker in the Los Angeles area, particularly as a cash game expert.

Brown certainly came close to victory against Schock, but fell short when only one card would have sufficed – although he will surely leave Vegas with some great memories as well as a few dollars in his wallet.

Finally, a little curiosity for you in a tournament that attracts colourful characters. The fourth-placed finisher, Carter Gill – from an event that paid down to 63rd – is a 24-year-old from Madras in Oregon. Nothing strange there, I hear you say. But, wait – Carter claims to be a hand model. Well, he will surely get extra employment from the exposure his digits received during his run to a $97,773 prize.