Recent LAPT Brazil winner Victor Sbrissa continued his good run to lead the star-studded EPT Monte Carlo when the chips were bagged up at the end of Day 1B. 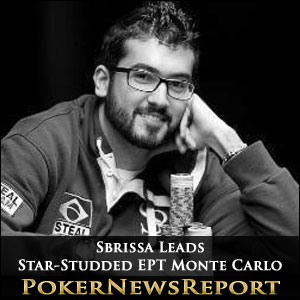 Recent LAPT Brazil winner Victor Sbrissa continued his good run to lead the star-studded EPT Monte Carlo when the chips were bagged up at the end of Day 1B.

As was widely anticipated, the sleepyheads and late arrivals who failed to compete in the first of two Day 1 flights on Monday turned out in force yesterday to play in the EPT Monte Carlo Main Event. A further 423 players ponied up the €10,600 buy-in (or qualified online) to create a total entrant list of 531 – far short of the 665-player field Mohsin ‘Chicagocards1’ Charania beat in last year´s Grand Final, but probably better than organisers feared after a disappointing Day 1A.

From the two Day 1s, 268 survivors will take their seats today at the Monte Carlo Bay Resort & Hotel, led by Brazilian poker player Victor Sbrissa who, this time last week, was celebrating his victory in the LAPT Brazil Main Event for $255,400. Sbrissa (224,800 chips) has a comfortable chip advantage over Noah Schwartz (204,600 chips) and Calvin Anderson (198,100 chips), with a huge gap back to the fourth placed Oleksii Kovalchuk (145,000 chips).

Stars in the Spotlight

Many of players who rolled into the Monte Carlo Bay Resort & Hotel yesterday would probably feature anybody´s list of the world´s top poker players. Ivey, Trickett, Blom, Sands, Seiver, ElkY, Moneymaker, Mizrachi, Hanson and Antonius all paid their money but left empty-handed, whereas Negreanu, O´Dwyer, Spindler, Obrestad, Reinkemier, Mercier, Juanda, Esfandiari, Ramdin and Vamplew all made it through to Day 2 of the EPT Monte Carlo.

Today the remaining ‘Stars’ will be joined by the survivors from Monday – when Day 1A chip leader Dan Smith only managed to stack up 136,500 chips ahead of Pablo Fernandez (135,900 chips) and Freddy Deeb (133,900 chips) – and about to start Level 9 (blinds 400/800 – ante 100) with six more 75-minute levels of play anticipated. The fallen ‘Stars’ will have the choice of six EPT side-events and numerous cash games to amuse themselves with.

After two Day 1s of the EPT Monte Carlo Grand Final, the top ten combined chip counts look like this –