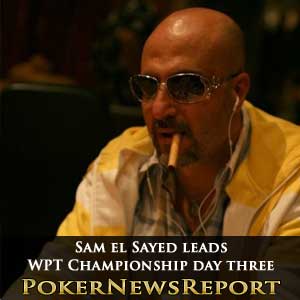 Two other competitors to break through the million chip mark follow Sayed. They are Serbian-Canadian poker pro Nenad Medic, on 1,098,500, and American Steven Kelly – a World Series of Poker bracelet winner from last year’s $1,500 No-Limit Hold’em Shootout event – on 1,005,000.

Medic, incidentally, also has a WSOP bracelet after picking up the $10,000 Pot-Limit Hold’em title in 2008 after defeating American Andy Bloch in a heads-up clash.

Not too far behind the leading trio is online poker star Christian ‘charder30’ Harder, on 887,000, as the American aims to substantially increase his $1.6million earned from live poker tournaments.

Next up is yet another American, Roger Teska, who will start day four on 846,000 chips, while completing the top six is a fourth United States player, Shannon Shorr, with 819,500 chips.

The leading British player is Sam Trickett, in 12th place. The 24 year old Englishman, who has 603,000 chips to keep him well above the average stack count, knocked put fellow Englishman Jake Cody in the final hand of day three.

Two other British stars remain in with a shout of success, with Welsh favourite Roberto Romanello in 12th spot on 602,000, while Englishman Dave ‘Devilfish’ Ulliott sits in 16th with 500,000.

Other notable poker players still hopeful of winning include this year’s PokerStars Caribbean Adventure (PCA) champion Galen Hall, who is down in 10th on 659,000, Canadian Haralabos Voulgaris – a High Stakes Poker champ in 31st place with 292,500.

Also still around for day four is the controversial Ali Tekintamgac. The German was banned from the final table of the Partouche Poker Tour (PPT) in Cannes, France, last November, after being accused of cheating.

However, despite complaints from many players, Tekintamgac – who qualified for a spot at the WPT Championship after winning last May’s Spanish Championship in Barcelona – was allowed to take his seat and sits down in 45th place on 155,000 chips.

With 52 player remaining, there are still 25 to be disposed of before they can be certain of cashing.

Every competitor that makes the six-player final table is guaranteed at least $225,654, while the winner will pick up $1,618,344 and the most desirable of WPT bracelets.