Usually when we are talking about high-stakes poker games online we are referring to the games at Full Tilt Poker, however lately the high-stakes tables on PokerStars have exploded with action and this past weekend saw Ben… 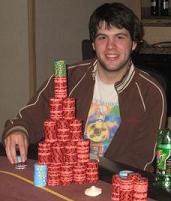 Meanwhile joeysweetp participating in the high-stakes games was causing quite a stit at the site. He finished second the the 2010 PokerStars WCOOP Main Event winning $1,404,725 however with his new bankroll he decided to take a shot against some of the best cash-game poker players in the world – big mistake when you are mainly a tournament player!

At one point there was a queue of 37 players on the waiting list at the table joeysweetp was playing at, all because they recognised how soft he was and wanted to take advantage of that. There are rumours that another high-stakes player who apparently knows joeysweetp was pleading with him in the chat box to quit the tables and save his bankroll, but it was too late. At the end of joeysweetp’s session he found himself down $296k after playing 1,565 hands at the $50/$100 tables. Although he still around $1.1 million left from his win, this weekend may give him a wake-up call before he tries to take on the tough high-stakes cash games at PokerStars again.