It is the weekend and there is no better way to celebrate than by cashing in one of FTOPS THREE $100,000 guaranteed poker tournaments scheduled for today. 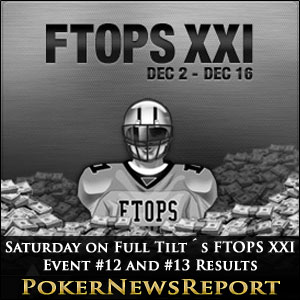 Hurrah! It is the weekend and there is no better way to celebrate the fact than by cashing in one of FTOPS THREE $100,000 guaranteed poker tournaments scheduled for today

Saturday is the second best day of the week for recreational online poker players to camp in front of their computers and indulge in their favourite virtual pastime. For many, this will be their first opportunity to compete in a FTOPS event, and it promises to be a day of high hopes, shattered dreams and glorious celebrations.

There will be a wide range of talents on show today at Full Tilt Poker as Heads-Up, Omaha and Rush tournaments are all included on today´s menu. It could also be a very long day for players who want to compete in all three events, with substantial guarantee-busting fields virtually assured after several weeks of satellite events.

Players for whom the $535.00 buy-in is a bit steep, might like to attempt the $2.00 64-player HU SnG in the FTOPS Lobby which will win you a seat at the last minute satellite (see below). Players who already have the buy-in in their Full Tilt Poker bankroll should note that there are seats being held back for the last minute satellites so, if it looks as if the tournament is going to be fully subscribed, you may need to pre-register early to be assured of your place at the tables.

FTOPS #15 is a 6-Max Triple Chance PL Omaha Hi event for which the cards will be in the air at 14.00pm server time (7.00pm GMT). The $322.00 buy-in tournament gives players 2,500 starting chips and two tokens to add to those chips if they bust out before the end of Level 8 (15 minute levels in this event) or if they just feel like adding to their chip stack within the first two hours.

There is also a 2-hour late registration period for FTOPS #15, so expect a lot of players to join the tournament after they have had their tea, and swell the prize fund well beyond the $100,000 guarantee.

The day´s concluding event is a SuperStack (5.000 chips) NL Hold´em Rush tournament with a $216.00 buy-in. Players should note that despite its name, FTOPS #16 is not a Turbo Rush tournament and, as it does not start until 17.00pm server time (10.00pm GMT), it could be quite early on Sunday morning before a winner is determined (Sunday morning if you live in Europe – Sunday afternoon anywhere east of Kuala Lumpar!). FTOPS #16 also has a modest prize pool guarantee of $100,000.

The Last Minute Satellites for Saturday´s FTOPS XXI action are a bit of a mixed bag – for example, the $2.00 HU SnG we mentioned above rewards the winner with a seat in the last minute satellite to FTOPS #14. However, the actual satellite to the $535.00 buy-in tournament is a Turbo full ring game with 1,500 starting chips and 5 minute levels. The satellite tournament starts at 8.00am server time (1.00pm GMT), has a direct buy-in of $109.00 and guarantees five seats to FTOPS #14.

The last minute satellite route to FTOPS #15 is far more straightforward. A $55.00 buy-in 6-Max Turbo Omaha Hi tournament is scheduled for 11.30am server time (4.30pm GMT) and guarantees five seats to the target tournament. Unlike the target tournament however there is no Triple Chance and, if you bust out in an early level – you are out! Late registration for this event is available until the end of level 6 but, as this is a turbo tournament, that means you only get 30 minutes after the game starts to get involved.

There is also a 30-minute late registration period for the final last minute satellite of the day – the qualifier for FTOPS #16 which is a non-Rush full-table Turbo tournament with a buy-in of $55.00. 10 seats are guaranteed for the target tournament on this occasion and the last minute satellite begins at 14.30pm server time (7.30pm GMT). Players climbing up the FTP Steps ladder may also use a Step 5 ticket to enter directly into FTOPS #16.

Norajean Back in Town and Russians Cannot Stop Winning

There were just two tournaments played in the Full Tilt Online Poker Series on Friday, and both managed to smash their guaranteed prize pools.

FTOPS #12 went to one of online poker American refugees – Brandon “norajean” Meyers – who originally comes from Minnesota, but who hopped over the border into Mexico when the land of the free stopped being so … well, free. It was a good move as far as Brandon was concerned, because since he started playing out of Mexico he has beaten a field of 16,572 to win a MiniFTOPS on the old Full Tilt Poker, come second in a SCOOP event earlier this year and now won his first FTOPS tournament – all in 6-Max games.

On this occasion Brandon bested a field of 981 players in the $216.00 buy-in SuperStack event; overcoming “ydere” in the heads-up – one of four Dutch players to make the final table – and collecting the first prize of $40,907. Brandon´s win elevated him into tenth position in the FTOPS Leaderboard competition – an update on which can be found below.

We mentioned in our preview of Friday´s FTOPS action that the placement of event #13 was interesting – the $322.00 buy-in 6-Max Triple Draw 2-7 lowball tournament – but schedulers at Full Tilt Poker would have been mighty pleased to see 208 players register for the $20,000 guaranteed event and create a prize pool of $62,400.

Russian high-stakes player “Gennadiy As” emerged as the player with the worse hands (the lowest cards win in 2-7) to capture the $13,590 first prize after a deal was made in the heads-up against Norway´s “kingkai”. It was also a good day for Polish poker player “malyszu”, who won his entry to the tournament in one of the last minute satellites and managed to squeeze a min cash of $686.00 for his efforts.

A nice story emerged from Thursday´s FTOPS #11 – in which Sebastian “p00cket00” Sikorski beat Chris Moorman in the Shootout tournament. Chris Moorman is in the Czech Republic, competing in the WPT Prague, and was playing on a very ropey internet connection which was constantly getting disconnected. Despite starting the heads-up with a 4:1 chip advantage, Sebastian Sikorski waited for Chris to get re-connected every time the connection was lost, even though he could have taken a massive advantage while Chris was involuntarily sat out. A worthy Shootout champion!

There was no great movement on the FTOPS leaderboard yesterday. Thomas “Garbally” Finneran moved up a position into second after cashing in event #12, while event #13 winner “Gennadiy As” entered the Top Ten in fourth place due to previous cashes this week in FTOPS #2 and FTOPS #8 – interestingly (if you see him on the tables today) “Gennadiy As” is yet to cash in a NL Hold´em tournament!