Sartorial Sanioglu at Top of EPT Deauville Field after Day 3

Paris estate agent Ekrem Sanioglu heads the field after Day 3 of the PokerStars.fr EPT Deauville Main Event – not just in chips, but as the best-dressed player. 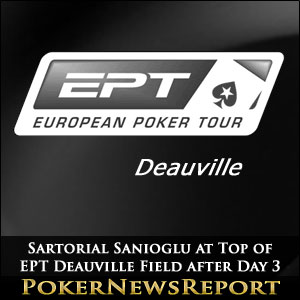 Paris estate agent Ekrem Sanioglu heads the field after Day 3 of the PokerStars.fr EPT Deauville Main Event – not just in chips, but as the best-dressed player.

Day 3 of the EPT Deauville Main Event was primarily concerned with who was going to be in the money and who was going to be eliminated from the tournament before the 95-player bubble burst. 137 players returned to the Barriere Casino yesterday, hopeful of either running short stacks into a prize-playing position or maintaining the safety of their big stacks.

The bubble burst after nearly two levels of play had been completed (details of that below), but those who could bear to lift their eyes from their cards during that stressful period might have noticed a very well-dressed chap seated behind an increasing pile of chips.

Sanioglu Dressed for the Occasion

Ekrem Sanioglu came to the EPT Deauville Main Event yesterday with a comfortable chip stack of 204,600 chips and even more comfortably dressed in a quality jacket with Armani accessories and wearing blue suede shoes. His apparel did not change throughout the day, but his chip stack did – as Sanioglu bagged and tagged 1,300,000 chips at the close of play.

The Parisian estate agent enjoyed the first two levels of play more than most, chatting and laughing with his table companions as he bust one after another – his first victim being Francis Agusti in a straightforward J♦ J♣ > 7♥ 7♦ KO, and then Ayaz Manji 8♣ 8♦ > 6♣ 6♥ after Manji had made a Full House on the flop of 8♠ 8♥ 6♦, but Sanioglu had flopped Quad Eights.

Seated at Sanioglu´s table for the first two levels was Stephen Chidwick – not quite as well-dressed, but with a formidable recent history of tournament cashes which included a third place finish in the EPT Prague Main Event. Unfortunately for Chidwick, he was to be the EPT Deauville bubble boy by busting out in 96th place – not at the hands of Ekrem Sanioglu, but by German player Tobias Wagner.

Chidwick had already experienced the swings and roundabouts of fortune during the first level of play when Alain Alezra had caught an overcard to cripple him A♥ 9♦ > K♦ K♣, but then Chidwick caught an overcard himself to double back up Q♣ 10♣ > J♠ J♥ against Ihar Soika.

Unfortunately for Stephen Chidwick he was once again at the wrong end of an overcard scenario at the end of Level 16; when he moved all-in with K♠ K♦ and was called by Tobias Wagner, who had A♦ K♥. Wagner hit the A♣ on the flop and, with no one-outer miracle to save him, Chidwick was sent to the rail as the bubble boy, with the rest of the field now in the money.

The Latest on the Roundabout of Live Poker

In yesterday´s PokerNewsReport, we made reference to varying fortunes of James Mitchell and Jasper Wetemans; who had both made it into Day 3 with similar chip stacks – but after Mitchell had at one stage been the tournament chip leader and Wetemans had recovered from being reduced to his last 1.300 chips.

The fortunes of both players also took different paths on Day 3 of the EPT Deauville Main Event – Mitchell making an early dash for glory with J♦ 7♦ against Patrick Bruel´s K♣ 9♠ and missing his flush draw to be bust from the event out of the money, while Wetemans waited until the right moment to double up A♦ K♦ against Renato Almeida´s A♥ 4♥ and eventually finished in 53rd place for €12,080.

The third player mentioned in the “Roundabout” section of yesterday´s report – the yo-yoing Niels van Leeuwen – did not enjoy such good fortune with A♦ K♦, and was bust from the tournament by JP Kelly´s Q♣ Q♠ – Van Leeuwen unable to supplement his victory in the FPS Deauville Main Event last weekend.

Looking Ahead to Day 4 of the EPT Deauville Main Event

Day 4 of the EPT Deauville Main Event should be a pivotal one in terms of who wins the major prizes – it could also be a rather short one. The tournament is not scheduled to finish until Saturday and, with just 41 players remaining in the event, it could – in normal circumstances – be played out in one day. However, the likelihood is that play will continue until just sixteen players remain, who will return tomorrow to play down to a final table of eight.

When players take their seats at the Barriere Casino in Deauville, they will be entering Level 20 (blinds 5,000/10,000 – ante 1,000) and a very interesting feature table is lined up for viewers on the live stream – with three of the top four chip leaders drawn together – Eugene Katchalov, Norbert Szecsi and Sotirios Koutoupas. Ekrem Sanioglu might have avoided the major chip stacks, but he will have no easy time of it either, with JP Kelly and Eureka Prague Main Event winner Dmitri Holdeew for company.