David ‘Doc’ Sands won the WPT Super High Roller after the six-handed final table extended into the early hours of the morning at the Bellagio in Las Vegas. 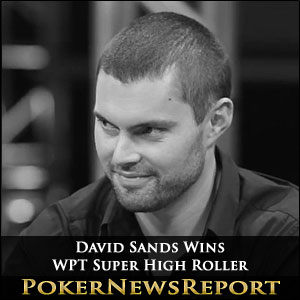 David ‘Doc’ Sands won the WPT Super High Roller after the six-handed final table extended into the early hours of the morning at the Bellagio in Las Vegas.

Just as many observers felt that play might have to be stopped for the night and a day added to the WPT Super High Rollers schedule, two quick eliminations saw David Sands win the event and collect the $1,023,750 first prize from Joseph Cheong and Daniel Perper.

Both Sands and Cheong had been highly fancied to be involved in the battle for the title of WPT Super High Roller Champion after entering the final table well-stacked, but Daniel Perper´s rise into the reckoning made for fascinating viewing for romanticists after he started the day at the foot of the chip counts with only 10 Big Blinds to play with.

The climax of the WPT Super High Rollers started in sensation fashion. In the fourth hand of the day both Andrew Robl (A♠ A♥) and James Courtney (A♦ A♣) were dealt pocket Aces. Robl survived a scare after three Clubs were dealt on the flop and collected his share of the blinds (Level 13 8,000/16,000) and antes (2,000).

In the next hand Daniel Perper moved all-in with A♣ K♣ and was called by Steven Silverman (Q♦ Q♠). The K♠ on the flop was good enough to double up Perper, and Andrew Robl then got the double-up he needed in hand #9, when his A♦ Q♦ connected with the Q♥ on the board to best David Sands K♦ 10♠.

Perper got another double-up in hand 16 when his Q♥ Q♠ was too good for Joseph Cheong´s 8♥ 8♠, and increased the size of his chip stack further when his 10♦ 10♠ were too good for Steven Silverman´s 10♥ 6♥. Sadly for Andrew Robl, his next attempted double-up saw his demise when he ran his K♣ Q♣ into the K♥ K♦ of James Courtney as was busted in sixth.

Perper from Last to First in 99 Hands

A further 71 hands were dealt before the next elimination – during which time everybody with the exception of Daniel Perper had taken and lost the chip lead and been through the 2 million chip barrier and back again; despite Perper getting another double-up through against David Sands (K♥ Q♥ turned a flush > J♥ J♠). When the elimination came, it shot Perper into the chip lead for the first time in the tournament.

Overnight chip leader James Courtney was the unfortunate ‘bubble boy’ (despite being the oldest competitor at the table) and finished out of the money after calling Daniel Perper´s bet of a flop of J♠ 8♦ 6♣ and then moving all-in after the Turn 9♣. Perper called to reveal J♣ 8♥ for two pairs, while Courtney was holding 7♣ 7♦ for a pocket pair and an open-ended straight draw. Unfortunately for Courtney the K♦ was dealt on the River, and he was sent to the rail out of the money while Daniel Perper now had almost half the chips in play as the game went three-handed.

Perper´s Double Up Magic Runs Out after Midnight

Joseph Cheong then took second place from Perper when Cheong´s flopped pair of Sixes was strong enough to win an 800,000 chip pot, and the writing was on the wall for Daniel Perper´s championship aspirations when he shoved the last of his chips into the pot with K♥ 7♠ and was called by David Sands (5♦ 5♥).

The 5♦ on the flop ended Daniel Perper´s last-to-first Cinderella tale as Sands went on to make a Full House and send Daniel Perper out of the WPT Super High Roller event in third.

Sands Takes No Time to Wrap Up Cheong

A fascinating day´s poker was brought to a quick conclusion in the heads-up of the WPT Super High Roller. David Sands had taken a 4.765 million -v- 1.530 million chip advantage into the climax of the event and was soon putting Joseph Cheong under pressure.

By the fourth hand of the heads-up, Joseph Cheong was already down to 1.135 million chips and moved all-in with A♠ 3♦. Sands called with A♥ 8♦ and the cards were on their back.