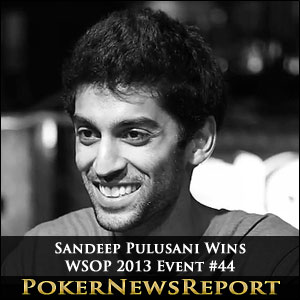 Phillippe Vert was the first player to be eliminated from the tournament after losing his last hand to Martin Hanowski early on in the final table. Vert, who had 6♣ 6♠, was actually ahead after the flop when he hit a set.

That prompted Vert to call Hanowski’s all in after the turn, and it looked like he’s stay in the tournament after Hanowski showed A♦ A♠. Unfortunately for Vert, the A♥ came on the river, which gave Hanowski a bigger set and knocked Vert out in ninth spot.

Eighth place in the event went to Pedro Rios, who was eliminated in the very first hand after the dinner break by Hanowski, who claimed his second straight final table scalp. With 8♦ 8♠, Hanowski called Rios’ (Jh} 10♥ all in before the flop, and they held on the A♠ K♦ 4♦ A♥ 9♠ board to win the hand and eliminate Rios from the tournament.

Just three hands later, Nam Le was knocked out of the event after he lost a pre flop showdown to Niall Farrell. Le looked really good with K♠ K♦, which led him to call Farrell’s all in move, but unfortunately for him, Farrell turned over A♠ A♣.

Farrell’s Aces held on the board and even hit a nut flush on the river after it showed the 7♠, the fourth spade on the board. It was a case of wrong place, wrong time for Le, who exited the tournament in seventh place.

Farrell then claimed a second final table of his own when he eliminated Mark Teltscher from the event in sixth spot. Teltscher moved all in before the flop with A♣ Q♠ and was called by Farrell, who showed 5♣ 5♦.

Teltscher was behind, but had a number of outs which could have kept him in the event. They did not come however, and Farrell’s Fives were able to hold on and win the hand while sending Teltscher packing from the tournament.

Hanowski did not seem content to be tied in most final table knock outs in the event, as he claimed his third when he knocked Zo Karim out in fifth spot. Karim went all inbefore theflop with K♠ Q♥ and was called by Hanowski, who was ahead with A♠ J♦.

The 5♦ 8♣ Q♠ flop put Karim ahead, however, but Hanowski did not have to sweat for long after the A♥ came on the turn, putting him back in the lead. The 3♦ on the river kept Hanowski’s hand dominant and, with that, Karim’s time in the tournament was over.

Despite having the most scalps on the final table, Hanowski had to settle for fourth place after he lost a showdown to Farrell, who himself claimed his third knock out at the table. Hanowski lost the bulk of his chips after losing another showdown to Farrell.

This time however, Hanowski would lose all of his chips after again coming second best. Hanowski moved all in before the flop with K♠ K♥ and was called by Farrell, who showed A♠ J♠. Farrell hit an Ace after the flop came A♥ 7♠ 5♣, and would go on to win the hand after the turn and river both showed Nines.

Farrell then knocked Michael Rocco out of the event after winning a showdown against him. Farrell, who had K♣ K♥, initially raised to 125,000 pre flop, but Rocco reraised all in with 6♣ 6♥ and was promptly called by Farrell. The Kings held after the board showed 4♦ 2♦ 7♣ J♠ 8♦, which eliminated Rocco from the event in third place with an extra $229,500 to his name.

Rocco’s elimination left Farrell and Sandeep Pulusani, with Farrell holding a colossal chip lead over Pulusani when heads-up play began. It appeared that Farrell was on his way to an easy victory as Pulusani folded to every raise from Farrell early on.

He doubled up soon enough though after winning an early showdown and eventually doubled up once again to take the chip lead later on in heads-up play.  Farrell briefly retook the lead a few hands later before losing it again in another showdown against Pulusani.

That showdown gave Pulusani a massive chip lead and set the stage for his the David vs Goliath battle to be complete with Goliath as the victor. The last hand of the tournament was the hand after Pulusani’s chip up, with Farrell moving allin before the flop after an initial raised from the eventual winner.

With A♦ 2♣, Farrell was outkicked by Pulusani who had A♣ 3♥ and the 3♦ 7♣ 5♦ on the flop put Pulusani further ahead. The 9♣ on the turn kept him in the lead and the A♥ on the river gave him a Two Pair, winning him the hand the event.