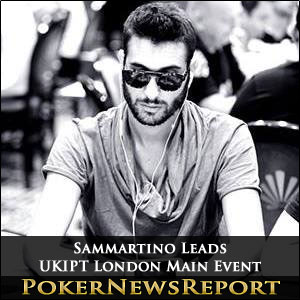 Dario Sammartino takes a substantial chip lead into the second day of the UKIPT London Main Event ahead of some notable stars of the live poker scene.

Dario Sammartino is no stranger to the live poker circuit. He finished fifth in the IPT Nova Gorica Main Event in August, won the IPT San Remo Hi Roller in April, cashed in the last EPT London Main Event and was still in with a chance of WSOPE glory on the penultimate day of the event won by Elio Fox.

However, among the star-studded line-up for Day 1B of the UKIPT London Main Event, his presence was largely ignored – until the chips were bagged and tagged at the end of the night and it was discovered that Dario Sammartino had accumulated 265,400 chips.

It may be a little early to talk about who will be winning what, but a total of 747 players either paid the £1,100 buy-in or qualified online for the UKIPT London Main Event, from which the top 111 players will be guaranteed a min cash of £1,810, with the prize for the tournament winner a colossal £136,875.

When the cards are in the air for Day 2 of the UKIPT London Main Event, 223 players remain in the tournament after the two opening days of ten levels. Play will recommence on Level 11 (blinds 800/1,600 – ante 200) and is anticipated to continue for another eight levels.

Players who bust out early will have the opportunity to get back on their bikes in the UKIPT London Cup that gets underway today at the Grand Connaught Rooms in Covent Garden and players should note PokerStars tweeted out last night that this is no longer a re-entry event. (The EPT London Super High Rollers also starts today).

Dario Sammartino´s chip lead accounts for a 24 Big Blind advantage over Richard Trigg, with the rest of the field a further 10 Big Blinds behind. However, the “rest of the field” includes 2013 PokerStars Caribbean Adventure winner Dimitar Danchev and 2013 EPT Barcelona Final Tabler Antonin Duda.

You can see how the UKIPT London Main Event plays out by following @PokerNewsReport on Twitter.