Italian poker player Dario Sammartino holds a healthy lead after Day 2 of the EPT Deauville Main Event, with the remaining players just 42 spots from the money. 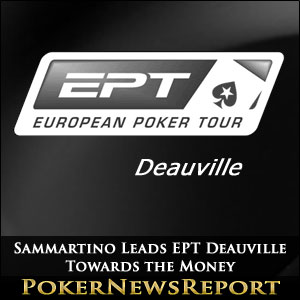 Italian poker player Dario Sammartino holds a healthy lead after Day 2 of the EPT Deauville Main Event, with the remaining players just 42 spots from the money

Just six levels of play were completed in the EPT Deauville Main Event yesterday, but it was plenty long enough for the tournament to be turned on its head and see a whole new group of players occupy the top spots on the leaderboard.

At the close of play, Dario Sammartino had increased his stack from 88,800 chips at the start of the day to an impressive 427,700, courtesy of some solid play and a little good fortune when hitting a runner-runner straight with {J♣} {5♣} to relieve Matt Frankland of half his stack.

Sammartino will have an eleven big blind advantage over Zimnan Ziyard (392,500 chips) and Norbert Szcesi (386,900 chips) when play resumes at the Barriere Casino this afternoon; when the 137 survivors from Day 2 will be looking to get into the ninety-five places that cash in the EPT Deauville Main Event.

388 players sat down for the beginning of Day 2 after the late registration of Jean-Baptiste Loll, who had funded his entry by being runner-up to Eli Heath in the Turbo Bounty side event on Monday night. Loll was just one of 250 players who failed to make it through Day 2 – with some surprises among those who were sent to the rail on a dramatic Day 2 of the EPT Deauville Main Event.

The most notable absentee when the chips were bagged and tagged at the end of Day 2 was Ayman Zbib, who had started the day as overall chip leader. Zbib lost half of his chips in one of the first hands of the day, when his K♣ J♦ flopped a pair of Jacks and improve to Trips on the River. Unfortunately for Zbib, his opponent Vojtech Ruzicka (10♦ 10♣) had flopped a set which improved to a Full House on the River and Zbib lost the rest of his chips before the end of the second level.

Others to depart during the early stages of Day 2 included the short-stacked Bertrand “ElkY” Grospellier (who was bust before most players had taken their seats), “Friend of PokerStars” Natalie Hof – who found a good spot to get all-in with A♥ K♦ but failed to catch the Ace she needed to improve past Thomas Miller’s K♠ K♥ – and Kevin MacPhee, whose King/Queen combination had improved to a straight on the Turn, but whose opponent’s pocket Tens improved to Quads on the River.

The Roundabout of Live Poker

Two players who survived through the day were Jasper Wetemans and James Mitchell – but both will have different feelings about it. Following the demise of Ayman Zbib (above), UK poker player James Mitchell was elevated into the tournament lead with 245,000 chips following a Set > Set hand in a 100,000 chip pot. However, after doubling-up Jesper Hansen K♦ K♥ > Q♠ Q♦ during Level 13, Mitchell´s stack went into freefall and he finished the day with just 35,700 chips (12 Big Blinds).

Conversely, Dutch poker player Jasper Wetemans will be celebrating his Laserus-esque recovery from having just 1,300 chips to bagging and tagging 39,800 chips at the end of Day 2. Wetemans had a terrible start to the day after running Ace-rag into pocket Jacks and Ace-Queen into pocket Aces. A double-up against Freerk Post (pocket Nines > flopped pair of Eights) saved Wetemans from being blinded out, and he then tripled-up in a three-way pot against pocket Queens and Ace-Queen when his pair of Fours improved to a set on the Flop.

Another player who survived the swings and roundabouts of fortune on Day 2 of the EPT Deauville Main Event was Niels Van Leeuwen. Van Leeuwen won the FPS Main Event on Sunday and played through most of Day 1B with a storming hangover after a little too much celebrating! His chip stack on Day 2 was up and down like a yo-yo – falling to below 20 Big Blinds after doubling up Anthony Lellouche A♣ K♣ > J♥ J♦ in the second level of the day, before recovering with A♠ Q♠ > Nicolas Chouity´s J♦ 10♦, and A♣ 9♥ > Christopher Frank´s J♠ 7♠ to finish the day with 105,300 chips.

Looking Ahead to Day 3 of the EPT Deauville Main Event

When play resumes this afternoon at the Barriere Casino in Deauville, the tournament will be entering Level 15 (blinds 1,500/3,000 – ante 400). Play is likely to be frantic during the early stages as short-stacked players attempt to double up, then go dead on the fringe of the 95-player bubble, before going wild again once the bubble bursts (a min-cash is worth €9,500).

Those at the top of the leaderboard will be hoping to avoid the chaos and emerge unscathed in pursuit of the €614,000 first prize; however, as we saw on Day 2, a good chip stack going into the day does not necessarily mean a good one coming out! Nonetheless, good luck to those players who have done well to get this far: