Trickett has confirmed that he will be joining the $1 million buy-in The Big One for One Drop poker event taking place during this summer’s 43rd staging of the WSOP. 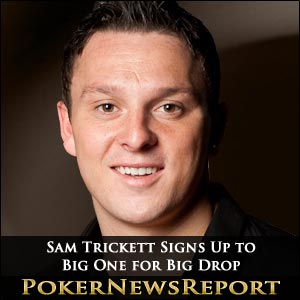 English poker pro Sam Trickett has confirmed that he will be joining what is already a stellar line-up for the $1 million buy-in The Big One for One Drop poker event that will take place during this summer’s 43rd staging of the World Series of Poker (WSOP) in Las Vegas.

Having only last week announced on microblogging website Twitter that he had quit Titan Poker, the 25-year-old from Nottinghamshire once again tweeted some big news when writing: Just sent my form off to register for the $1m buy inn (sic) tournament. Now im excited for the WSOP…

OK, his typing might be a bit off, but his skills as a poker player certainly aren’t – and he’s sure to be doing all he can to surpass his best ever WSOP finish from 2010, when he pocketed $505,725 for taking the runner-up spot in event #17, a $5,000 buy-in No-Limit Hold’em tournament, at The Rio All-Suite & Casino.

However, he’ll have his work cut out for him as he eyes the top prize – which has already hit the $12,266,668.20 mark – as well as a specially-commissioned platinum bracelet, with the likes of Jonathan Duhamel, Bertrand ‘ElkY’ Grospellier, Daniel Negreanu, Justin ‘Boosted J’ Smith, Tom ‘durrrr’ Dwan, Johnny Chan, Erik Seidel, Patrik Antonius, Gus Hansen, Team Party Poker Pro Tony G and several wealthy businessmen already confirmed among the 30 definite starters.

It should not be forgotten, though, that $111,111 from each $1 million buy-in for the world’s highest ever stakes poker game will go to the One Drop charity – which was set up by Cirque Du Soleil founder Guy Laliberté – in an effort to provide clean water throughout the planet.

Those 30 players have already guaranteed that $3,333,330 will be donated to what is a noble effort to raise awareness among individuals and communities on water-related issues to convince them of the need to mobilise for universal access to water and urges them to adopt sound habits for managing this precious resource for future generations.

PokerNewsReport.com will keep you updated on this fantastic tournament that is included on the WSOP schedule as event #55 and which runs for three days from Sunday, July 1.