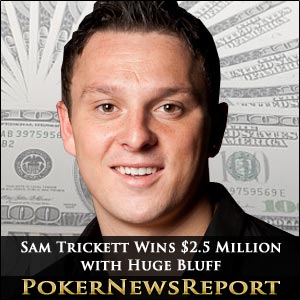 In a stone cold bluff in high-stakes ring game action in Macau recently, Sam Trickett showed why he is worthy of being regarded as one of the best all-around players in the game today, taking down a massive $2.5 million pot holding nothing but a keen knowledge of his opponent’s playing style.

In explaining his rationale for the winning bluff, Trickett reasoned that his aggressive opponent tended to continuation bet way too many flops. So when his rival checked on the flop, Trickett was expecting the player to fold following Trickett’s $60,000 bet after the flop. When the normally aggressive post-flop player called, Trickett put him on either pocket eights, a seven, or possibly holding a hand with an ace and another high card. Seeing the 3♥ hit the board on the turn, Trickett said he was determined to bluff his opponent all the way.

“I bet HK $1.1 million and he raised me to HK $3.8 million,” Trickett explained. “I think he’s trying to rep pocket sevens or tens here, but I didn’t think he would ever play them like that–he would have just bet on the flop. He would try to build the pot because he has no showdown value because he’s out of position. So I’m pretty sure he’s bluffing and I just call, which is how I would play it if I had a full house. I had it in my head that he would never bluff again on the river. Sure enough, he checked the jack on the river and I moved all-in for about HK $8 million into a pot of a similar amount. He folded after a 30-second tank.”

Trickett enjoyed a fantastic 2011, becoming UK’s all-time top tournament money winner following his victory in November at the Partouche Poker Tour Main Event in Cannes for €1 million ($1,365,680). With that title, the 25-year-old pro increased his career tournament winnings to about $6.5 million, surpassing Dave “Devilfish” Ulliott at $6,006,899.

After telling the story of the winning hand, Trickett admitted that the “biggest bluff” of his career would probably never be matched in the future. But then again, knowing the high-stakes action in Macau’s big cash game, you never know what might happen!