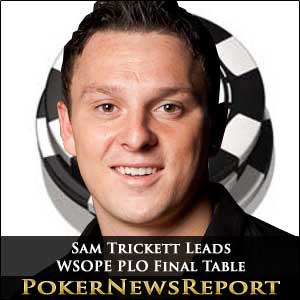 Sam Trickett and Cannes go well together! Having last month taken the chip lead at the final table of the Partouche Poker Tour NLHE Main Event which is due to conclude in November, Sam changed casinos and formats to smash the competition in the World Series of Poker Europe Pot Limit Omaha Poker event and takes a 50 big blind lead into today´s final table.

It will be a great achievement for the UK poker player if he goes on to win the event as, for all his success, a WSOP bracelet and winning a major Pot Limit Omaha Poker tournament are two feats which have to date managed to evade him.

A Great Start from Sam

Sam started the day drawn on the same table as overnight chip leader Shannon Storr and a host of players who had more substantial stacks than the 56,500 he had in front of him, but Sam started quickly and just got better. In one of the first hands of the day, Sam took Sean Jazayeri and Alexander Kravchenko for 32,000 chips in an uncontested pot, and then performed the same trick on one of his Partouche final table opponents – Oleksii Kovalchuk. Sam then eliminated Australian pot limit poker specialist Mike Guttman on his way to climbing above 200,000 chips.

Two knockouts in quick succession enabled Sam to rise to the head of the leaderboard. In the first, his 5♠ Q♦ K♠ 7♣ proved too strong for Michel Abecassis (9♦ 9♣ 4♥ A♥) on a board which ran 7♦ 6♦ 4♣ / 6♠ / K♥, and shortly after David Callaghan was Sam´s victim when Sam (K♥ K♦ J♣ 9♥) caught a heart flush on the turn to bust Callaghan´s (A♣ A♦ 9♦ 2♦) two pairs. Despite his commanding advantage, Sam will not be able to cruise the final table as there are some incredibly talented players among the competition for the bracelet.

Among those who will be aiming to knock Sam from the top of the perch when play resumes on the final day are Steve Billirakis – the youngest ever winner of a WSOP bracelet in 2007 aged just 21 years and 11 days – Erich Kollmann – whose first victory in an international Pot Limit Omaha Poker event came eleven years ago, and he has been sweeping up through Europe ever since and Sam Chartier – who is a WSOP Circuit winner and was victor in the 6 Max PCA Championship in the Bahamas last season.

GUKPT Main Event winner, Jerome Bradpiece and November Niner Eoghan O´Dea will be more than just making up the numbers in pursuit of the €147,171 first prize, and the field is completed by Sweden´s Ramzi Jelassi – who held a major chip lead for most of Day 2 – and Italian Michele Di Lauro, who was in second place at the conclusion of Day 1.

When play resumes at the La Croisette Casino this afternoon, blinds will be 2,500/5,000 with no ante.