Sam Trickett, one of the most successful UK poker players this year and a leading nominee for “Best Tournament Player” at the British Poker Awards, conjured his way into a substantial chip lead in the $3 million Epic Poker League (EPL) Main Event. 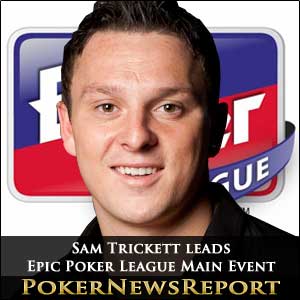 Sam Trickett, one of the most successful UK poker players this year and a leading nominee for “Best Tournament Player” at the British Poker Awards, conjured his way into a substantial chip lead in the $3 million Epic Poker League (EPL) Main Event.

With the field playing down last night to the final 18 – all of whom will cash – Sam took advantage of those on the fringe of the bubble to build a stack more than 50% bigger than his nearest opponent – Californian Hasan Habib.

Starting Day 2 of the Main Event, Sam was seated in 23rd position (of 63), with a chip stack of 115,000 – a little above the average and comfortably managing the blinds of 500/1,000. As players started to bust out around him, his only significant event of the early proceedings was to double up against John Racener, when Sam´s Q♣ Q♦ were too strong for Racener´s pocket 6´s. Sam was eventually to eliminate Racener, when he called Racener´s J♥ J♣ with his A♥ Q♥. The flop fell 10♥ 9♥ 9♦ – giving Sam plenty of outs. The Q♠ on the turn put Sam in the lead and the K♥ on the river sealed Racener´s fate.

Either side of the lunch break, Sam improved his prospects in the game by first eliminating James Mackey when his A♦ found an ace on the flop to bust out Mackey´s pocket 6´s, and then claiming the chip lead when flopping a straight against Frank Kassela´s two pairs. At this point there were just twenty players remaining, with play scheduled to continue until just 18 remained. The fringe of the bubble proved a very lucrative time for Sam, as he worried short-stacked players of their blinds and increased his post-Kassela chip count from 832,000 to an overnight 1,032,000.

Playing for a Million

One of the most appropriate decisions made by the organisers of the Epic Poker League was to increase the first place price money to $1 million from $982,660. Sadly, they had to knock $17,340 from the second place prize rather than contribute it themselves (it´s about what they spend an hour on PR) but all the remaining players agreed, so the deed was done.

Those remaining players, who are all now guaranteed a minimum cash of $43,190 are as follows: