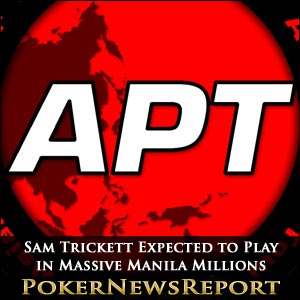 It appears that six of the world’s best-known poker players have signed up to take part in the HKD$1 million ($129,000) buy-in Asian Poker Tour (APT) Manila Millions Super High Roller tournament that gets underway on Friday at the Resorts World Manila’s Genting Club.

Poker News Report revealed last week that eight-time World Series of Poker (WSOP) bracelet winner Phil Ivey and online high-stakes specialist Tom ‘durrrr’ Dwan had confirmed their presence in the Philippines tournament that will possess a prize pool of at least $3 million following the announcement that a total of 25 players will definitely start the biggest buy-in event ever held in Asia.

The 25-year-old Englishman, who has earned more than $5 million from live tournaments, appeared to suggest that he’ll play in this incredible event after writing in his blog that he will be in the Philippines capital city this week – most likely to take on the other big-name pros lined up as well as the many Asian businessmen that will surely take part.

The railbirds might also be watching Team PokerStars Pro Jonathan Duhamel on Friday after the French-Canadian 2010 WSOP main event champ took to microblogging website Twitter to register his interest in the event with the APT, writing: “Given the structure, I would assume it is a 1 day event? Can that be confirmed?”

It remains to be seen if the 24-year-old – who made four final tables in January’s PokerStars Caribbean Adventure (PCA) to earn $1,205,970 – will turn up in Manila, but this event is definitely shaping up to be one cracking tournament.

The poker festival comes to a conclusion with the main event final table next Wednesday, before the tour heads off to India for the APT Asian Series Goa from May 21 to 27 at the Casino Royale, while the last leg arrives at Macau’s StarWorld Hotel & Casino from July 25 to 31.

For more information, check out the complete schedule of events at the APT Philippines 2012 or have a read of our earlier article on Phil Ivey and Tom Dwan.