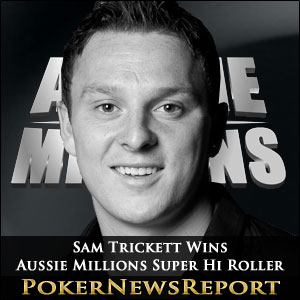 The Start of Day 2

Starting the day in fifth position – and out of the money – Sam Trickett started slowly, and was uncharacteristically forced out of a pot by Winfred Yu when holding an overpair on the turn. However, as players started to bust out of the event, a more active Trickett saw his betting decisions pay big dividends.

Yong and Seidel First to Depart

Richard Yong was the first player to bust out of the tournament when he ran his A♦ Q♥ into the A♥ K♣ of Igor Kurganov. Yong´s departure enabled Kurganov to take over the chip lead and raise the question once again whether AQ is the most expensive hand in poker.

The Bubble Takes a Long Time to Burst

With AUD$500,000 for fourth place and nothing for fifth, several hours passed before the next player was to leave the game. During this time, Sam Trickett took the tournament lead after calling Tobias Reinkemeier´s J♦ J♥ shove with his own pocket Queens. Reinkemeier hit a set on the flop, but Sam Trickett managed to complete a straight on the river.

Reinkemeier (A♣ 5♣) survived an all-in call against Kurganov (9♥ 9♠) when spiking the A♠ on the river, and then Kurganov (A♦ Q♠) himself was fortunate to survive against Fabian Quoss (A♣ K♦) when the board delivered two pairs and a potentially game-changing pot was chopped.

Once the bubble burst, the tournament was over within an hour. Winfred Yu was the unfortunate ‘bubble boy’ shoving with A♠ 4♠ against Igor Kurganov´s A♣ 7♦. Kurganov paired his seven on the flop and the runner-up in last year’s APT Asian Series Macau Main Event was bust in fifth. Almost immediately, Kurganov himself was to be eliminated.

On a flop of 9♦ 3♠ 2♠, Kurganov called Sam Trickett´s 80,000 chip bet. Trickett was again the aggressor after the turn card 4♠, but this time Kurganov check-raised all-in. Trickett snap called and turned over 6♠ 5♠ for a straight flush. Kurganov, holding J♠ 7♠ was drawing dead and eliminated in fourth – Sam Trickett increasing his chip advantage even further.

Spades also had a big part to play in Fabian Quoss´ departure – the German running his 7♠ 6♠ into the A♠ 10♠ of Sam Trickett. Trickett drew a Broadway straight by the turn and Fabian Quoss was sent to the rail in third place – Sam Trickett taking a 5-to-1 chip advantage into the Heads-Up.

At such a big disadvantage, Tobias Reinkemeier took the first opportunity he had to get the last of his chips into the middle. Shoving with K♥ 2♣, he ran into Sam Trickett´s A♠ 5♥ and with neither player connecting with the board, Sam Trickett became the 2013 Aussie Million Super High Roller Champion.