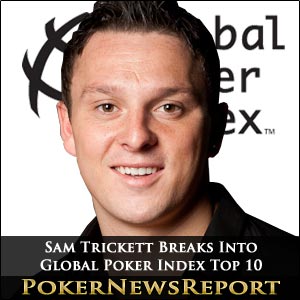 Sam Trickett has enjoyed a good year with his win in the Palm Beach Casino, Cannes, his third seven-figure success of the year to add to the AUD$1,400,000 he collected for finishing second in the AUD$250,000 Super High Roller No-Limit Hold’em tournament and the AUD$1,525,000 he secured for winning the AUD$100,000 No-Limit Hold’em event at January’s Aussie Millions Poker Championship in Melbourne.

While Trickett broke the top 10 in dramatic fashion, the remaining top 10 places remained pretty stable, with another American, Erik Seidel, dropping a few points due to his $100,000 Super High Roller event win from the Five Star World Poker Classic dropping into Period 2.

However, Seidel stayed ahead of the gathering pack in first place on 2,560.94 points to ensure that Bertrand ‘ElkY’ Grospellier remains in second on 2,493.71. The gap is closing, but can the Frenchman return to the top spot any time soon?

So there’s no change in the leading pack, but yet another States star, Sam Stein, gained one place to end the week in sixth spot on 2,178.26 points.

That means four players dropped out of the rankings. Eric Baldwin’s drop was particularly sensational as the American had been sitting at 228th last week. However, his massive drop came as a result of his first place at last November’s North American Poker Tour (NAPT) LA Bounty Shootout moving into Period 3.

Also falling out of the top 300 were Ruben Visser, of the Netherlands, Irishman John O’Shea and American Kenny Hicks.

While the American has not been able to record any impressive results lately, he did have some spare to be added to his Period 1 account. Katz does, in fact, have just one result included in Period 2 and that was his fourth place from May’s $5,000 buy-in No-Limit Hold’em tournament at the Five Star World Poker Classic.

This week’s biggest dropper was American Bernard Lee (1,101.10), who lost 68 spots to be placed at 252nd. The New Yorker’s fifth place at last November’s Heartland Poker Tour (HPT) main event in Soaring Eagle dropped from Period 2 into Period 3, so ensuring his big drop.

Next week should see former dealer Juha Helppi drop further down the rankings from his current 29th place.

The Finn’s runner-up spot at the €10,000 buy-in High-Roller No-Limit Hold’em tournament in the European Poker Tour (EPT) Barcelona last November will fall into Period 3, although he does still hold two more six-figure scores within Period 2.

Sweden’s Kent Lundmark – who is at 164th this week – will also see his ranking hit hard next week as his victory from the EPT Barcelona main event will also drop into Period 3.

Having collected $1,127,604 from that success, the Scandinavian does not hold a single six-figure cash. While he does have some five-figure results, it is the loss of the Barcelona triumph that will see him drop down dramatically – maybe even as many as 100 spots.

The Global Poker Index is maintained by globalpokerindex.com.