Trickett was attacked by 6 men after exiting a Las Vegas nightclub where he was celebrating his BIG ONE For ONE DROP second place finish for $10 million. 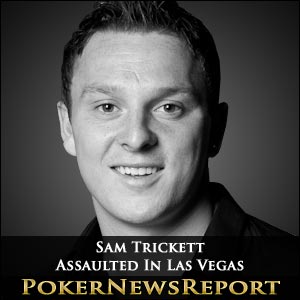 UK poker pro Sam Trickett was attacked and beaten by six men after exiting a Las Vegas nightclub where he was celebrating his runner-up finish in the BIG ONE For ONE DROP tournament that brought a payday of more than $10 million.

Trickett was reportedly with his girlfriend and other friends enjoying a night on the town when the unidentified attackers roughed him up. He sustained injuries in the attack, but none are considered serious.

Was having great day until 6 guys did this to me, Trickett said via Twitter, posting an accompanying photo showing several cuts to his face. Seriously wtf? Couldn’t be more angry… #cowards.

The miscreants were not after money, leading many to believe that the motive behind the attack may have been jealousy over Trickett’s multi-million dollar finish, as the British pro tweeted,  Is this what happens if ur successful? literally beat the shit out of me and spat in @NatashaSandu face all over nothing.

Sandu is Trickett’s girlfriend, who also took to Twitter to update the poker community on the attack and her boyfriend’s condition, saying, It wasn’t a mugging or anything just over nothing, sam is fine..gonna spend some quality time together now.

The BIG ONE For ONE DROP was the priciest event in poker tournament history, featuring a cap of 48 players who shelled out a $1 million buy-in, with $111,111 of each entry going toward charity to assist poor countries lacking in properly sanitized drinking water. Antonio “The Magician” Esfandiari captured the title, earning $18.3 million, the largest prize in poker’s storied history.

Trickett was sponsored by Matchbook.com for the event and was slightly upset at himself for his heads-up play versus Esfandiari. I’ll get over it, Trickett said. I would have liked to win for the bracelet and the prestige, but I can’t be too upset.

This marks the second time in seven months that a professional poker player was assaulted and beaten. In December of last year, Jonathon Duhamel was pummeled and robbed by attackers in his Canadian home. After fleeing with Duhamel’s Rolex, a WSOP gold bracelet, and cash, the robbers were eventually apprehended and arrested, with one of those facing charges turning out to be an ex-girlfriend of the poker star.

Sandu has confirmed that Trickett is recovering well after the attack and should be returning to WSOP action shortly.